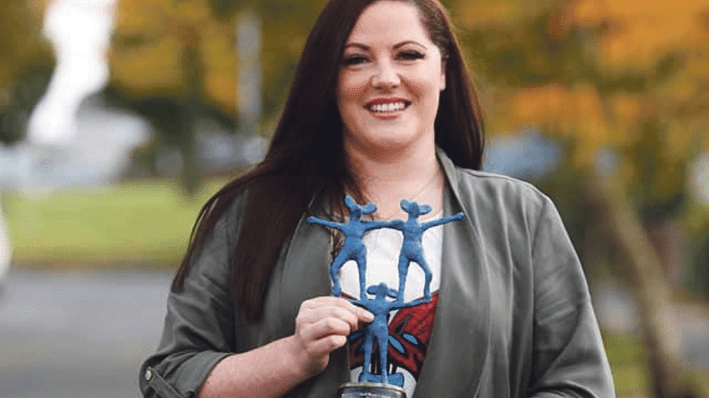 A TALLAGHT medical worker received the Lord Mayor’s Award last week for the care she provided to an elderly patient who lost her husband while battling the coronavirus in St Luke’s Hospital.

The elderly patient’s husband passed away while she was receiving care in St Luke’s, so she had to watch his funeral via livestream.

Trish, who works for St James’s Hospital and is based in St Luke’s, sat with her patient and held her hand throughout the funeral, as her family couldn’t be with her to comfort her – and Maire decided to nominate Trish for the award in recognition of the care her mother received.

Maire said: “We will never be able to thank [Trish] for the love and care she gave Mam on the saddest day of her life after nearly 70 years of marriage, when we couldn’t be there for her.”

Trish, a past pupil of St Mark’s Community School, told The Echo: “I was really surprised when I found out I was being nominated, because I generally don’t like the limelight and wouldn’t be putting myself out there.

“But it was lovely of them to nominate me, it’s really wonderful.

“My patient’s husband had died, and because she had Covid she had to watch his funeral on livestream. So I sat with her and held her hand as she watched the funeral.”

When asked if she was nervous about caring for the patient, Trish said: “I wasn’t apprehensive at all.

“It’s such a horrible situation for someone to be in that I wouldn’t want anyone to go through it alone.

“But I don’t feel that what I did was above and beyond – I think anyone else would’ve done it, any one of the other people on my ward would’ve done it because we’re all in it together.”

While Trish couldn’t receive her award at a ceremony as a result of Covid restrictions, she was still delighted to get the award in the form of a specially commissioned sculpture by Stephanie Hess, called ‘Harecules’, which was delivered to her home in Citywest on Friday, and a €1,000 voucher.

The Lord Mayor’s Award is now being given on a monthly basis to frontline workers who’ve worked through the pandemic, and who have been nominated by people who want to acknowledge their work.

Lord Mayor Hazel Chu, who grew up in Firhouse, said: “It was a really tough choice with some incredible people showing kindness, resilience and putting the elderly first.

“Trish, through her everyday actions and in particular how she cared for elderly Covid patients, is a testament to the incredible work done by frontline workers in the area.”

Trish added: “The attention has been overwhelming, but it was really lovely to be nominated.”

November nominations for the Lord Mayor’s Award under the category of transport staff are now being accepted at www.dublincity.ie/lordmayorsawards.