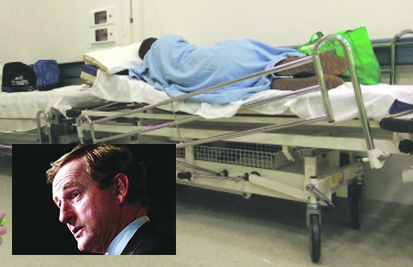 A LOCAL group has slammed comments made by Taoiseach Enda Kenny in the Dáil yesterday about the trolley crisis in Tallaght Hospital as “rubbish” and has said that the crisis is “the Taoiseach’s fault”.

The Taoiseach came under fire for his comments which were made in reply to a question from Fianna Fáil leader Micheál Martin after the story of a 91-year old man and his wife who were sat on trollies in the hospital for over 35 hours hit national headlines.

In response to the question from Deputy Martin who said the crisis was “chaotic and out of control”, the Taoiseach said that hospital management needed to explain how the situation was allowed to happen and “who was the person responsible for leaving that person there?”

The comments were made about a letter from emergency medical consultant Dr James Gray to hospital CEO David Slevin and Minister for Health Leo Varadkar in which he outlined the story of a 91-year-old man with Parkinson’s disease who had to wait on a trolley for 29 hours.

In the letter, Dr Gray said that the 91-year-old man’s story “is an example of how a dysfunctional system disgracefully treats some of our senior citizens”.

He said that “nobodyof any age should be subjected to this inhumanity” which has “no privacy, no dignity” and “constant light torture, resulting in major sleep deprivation”.

Triona told The Echo: “It’s the Taoiseach’s fault that this has happened. A letter from the hospital CEO in 2013 told Enda Kenny that continued budget cuts would lead to a fall in the quality of services.

“The Taoiseach’s comments were so disrespectful to every staff member in the hospital working to help patients.

“Do they think the hospital are hiding beds? Extra trolleys are being moved into wards every day because there are no beds.
“It’s about time that all politicians started backing the health service instead of just paying lip service.”

Fianna Fáil councillor Charlie O’Connor told The Echo that the local community are “appalled” by the situation and that the Taoiseach needs to understand that the system “is not working”.

He said: “It’s important that we now offer solidarity to the people in Tallaght Hospital who are working on the frontline.

“Parts of the new emergency service are not open and full services are still not available because of low staffing levels and there needs to be a demand for action so that the trolley crisis is eliminated.”

According to The Echo sources, Minister for Health Leo Varadker visited the 91-year-old man in hospital yesterday (Wednesday) to apologise for the situation.

Independent TD Eamonn Maloney said he was “surprised” at the Taoiseach’s comments and said he thought the Taoiseach would “understand” that “even if beds were available, there is insufficient nursing staff to monitor them”.

He said: “It’s a matter for Minister Varadkar and the Taoiseach to face up to. It was the wrong thing to say and anyone with any experience in Tallaght Hospital know that the staff do their very best.”

Sinn Fein TD Sean Crowe said: “The comments are a disgrace. They are totally out of order. The government should take responsibility for themselves. I have been on a trolley myself and it could be anybody’s mother or grandmother. It’s not the first pensioner. I have seen the system for myself – it lacks beds and staff are overworked,” he said.

A statement from Tallaght Hospital confirmed that an internal review into circumstances “surrounding the disclosure and characterisation of confidential patient information” will take place.

It said that the patient has “expressed strong dissatisfaction” in which his personal circumstances were revealed and that that patient who “suffers from a chronic condition requiring regular attendance at the hospital” expressed “appreciation” for the standard of treatment received at the hospital.