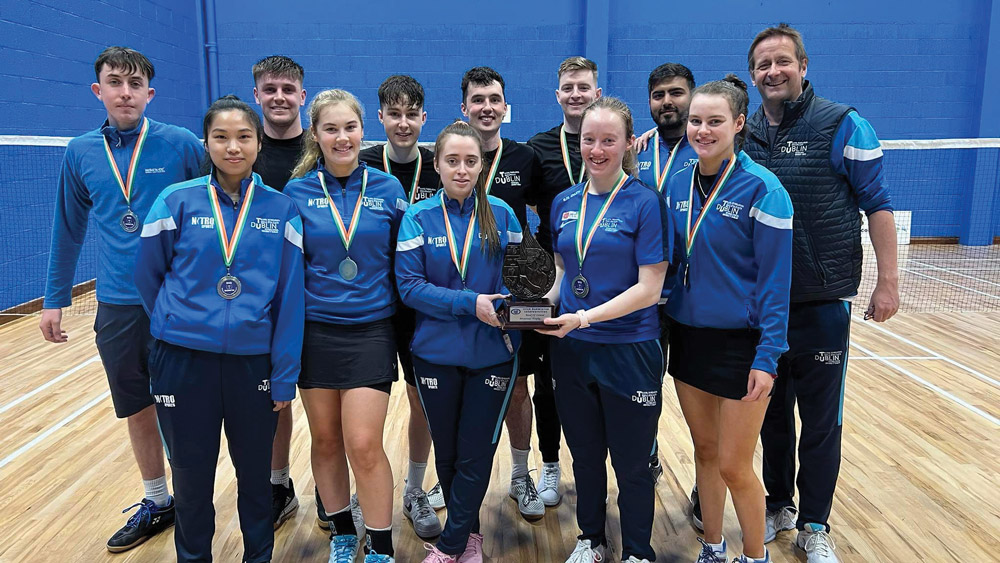 TU DUBLIN badminton team landed their very first Intervarsities title following a superb campaign that culminated in a 5-0 victory over NUIG in the final in Galway last weekend.

The squad made a blistering start in Group Three of the tournament, serving up 8-0 victories against both GMIT and MTU to progress to the last eight where they came up against Maynooth University.

Victories for David Walsh & Conor Bradley and Kate Frost & Leah Auld in the men’s and ladies doubles propelled them into a 2-0 lead.

And while Ben Power & David Barton were edged out by UL’s Amal Maharaj and Ethan O’Connor in the second men’s doubles, Caoimhe McKeown and Leonie Ward combined to see TU Dublin go 3-1 up.

The following four mixed matches saw more wins secured by Frost & Walsh, Power & Leonie Ward and Barton & McKeown to earn the team a 6-2 triumph and a berth in the final where they came up against NUIG.

Frost and Auld set the tempo with a victory over Molly Davies and Sarah Pingree in the first ladies doubles with Walsh and Bradley following suit in the men’s equivalent to make it 2-0.

The second series of doubles saw Barton & Power and Ward & McKeown deliver more wins to double the team’s advantage with the title then secured after captain, Frost and Walsh surmounted the tough pairing of Callum Thomas and Molly Davies 21-11, 21-10 to put their side out of reach.

For Ireland international, Frost, the victory was a poignant moment given that it was the first time for TU Dublin to win this title in what is her final year with the University.

“It is a testament to the hard work over the years by all the students who worked to help TU Dublin badminton clubs in both Tallaght and City Campus Clubs” Frost told The Echo.

“Also, now we can include Blanchardstown Campus students, so it has been a really inclusive team this year.

“Massive thanks to club coaches Mark Topping and Jackie Killoch and the sports offices in Tallaght Campus and City Campus for making this possible” she added.