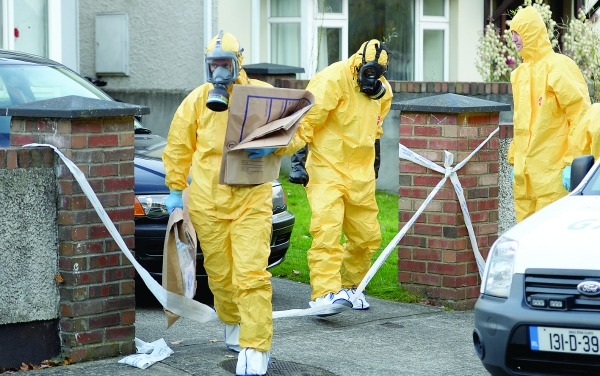 Two charged with possession of crystal meth in Clondalkin

TWO people appeared in court this week in relation to the discovery of meth lab in Clondalkin – understood to be the first of its kind in the State.

The drugs were subsequently reported to have a street value of between €2.3 million to €2.7  million.

The Echo understands gardaí initially went to the house to question an individual over a separate issue, concerning petrol which hadn’t been paid for at a local service station.

A number of homes were evacuated for a period of time during the operation, which allegedly found methamphetamine, along with 60 litres of a chemical product used in the process of making crystal meth.

A garda source said crystal meth has been discovered before in Dublin in smaller quantities, but nothing so far on the scale of the Clondalkin meth lab had come to the attention of authorities before.

On Friday, Joan Fennelly (34), of Monastery Heath Green and Jan Richter (30), of no fixed abode, appeared in court charged with possession of the drug.

Mrs Fennelly, a native of Philippines was released on bail. Mr Richter, a Czech national arrested at the scene of the raid, was remanded in custody to Cloverhill Prison, to appear before Cloverhill District Court on November 4.

Mrs Fennelly is due to appear at the Criminal Courts of Justice on the same date.

Both accused were granted legal aid.