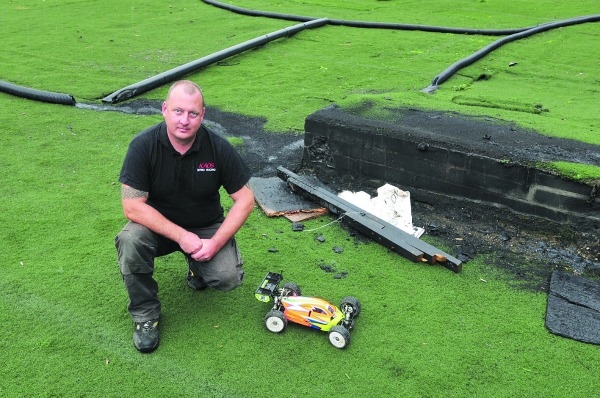 A COMMUNITY-driven nitro racing track was this week set alight for the third time, a repetitive act of vandalism that has punctured the future viability of the inclusive club.

Established just over two years ago, Kaos Nitro Racing has developed an off-road track for remote control buggies on the site of the old playground at the Tallaght-end of Tymon Park, with all work made possible by community support, membership, sponsorship and hours of volunteering.

Last Sunday, August 21, club members finished work on the grounds which, abiding by the sport’s regulations, brought the track up to competition spec – in the hope of staging national and European events.

However, the following night, the track, which is the only of its kind in Dublin, was set on fire.

Club founder Keith O’ Neill told The Echo: “We’re just all gutted, this is the third time that this track has been damaged by fire.

“The council has provided us with the site but all of the work done to develop the track, its maintenance and insurance is paid for by membership, sponsorship and community support.

“I reckon we’ve put about €16,000 into the track to date and hundreds of hours of volunteer manpower to get it up to spec.”

He added: “We’re trying so hard to get this amenity off the ground and were hoping to stage a competition in the coming weeks, which is now cancelled alongside a family fun day we had planned.

“There are only three of these racing tracks in the Republic of Ireland and alongside offering great opportunities for the area in terms of bringing in visitors, the club is really inclusive and offers something different for people of all ages and abilities.”

The club, which currently has 28 members, is now calling on South Dublin County Council to help secure the site through the provision of community funding.

“We have gone as far as we can without giving up”, Keith said.

“The council and the parks department have been very supportive, but we need assistance in securing the site.

“We can’t sustain any more vandalism, the site needs to be secured to ensure the future of the club.”

Tallaght Labour Party councillor Mick Duff confirmed that he will raise the issue with the council, adding: “It’s a real shame that such an inclusive and community-led club has been targeted by mindless vandalism again – and a club that is providing a real opportunity for young people interested in cars.

“I am 100 per cent supportive of this club and will talk with the council to see what options are available – and I would ask members of the community to report any anti-social activity that the see happening at the track.”

Mary Maguire, a senior executive officer with the council, told The Echo: “The council continues to work with Chaos Nitro Racing and regrets that the club’s track has been subjected to recent incidents of vandalism.

“The park is closed nightly to vehicular access with only pedestrian access after it is closed. It is not possible to restrict this access to those who wish to use the park as a place for recreation and amenity.”

Open to new members, and sponsors, Kaos Nitro meets in Tymon Park on Thursdays and Sundays and for further details visit www.kaosnitroracing.com or Facebook.