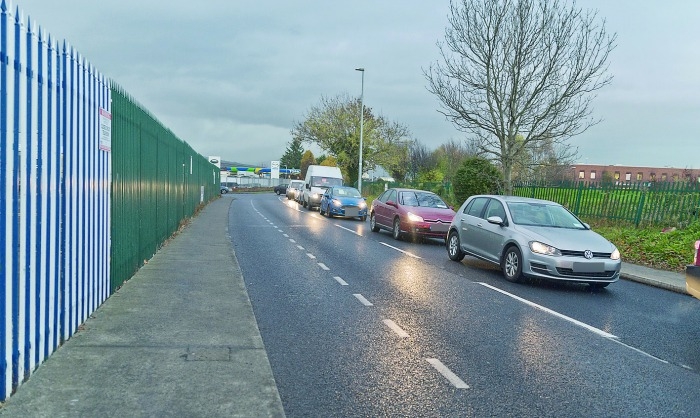 CALLS have been made for South Dublin County Council and construction companies to inform the public when major roadworks will be happening in the area, after “unannounced” works caused traffic chaos on the Greenhills Road last Saturday.

In recent months, construction work, associated with Amazon’s new data centre on the site of the old Jacob’s factory, has been ongoing – with Kilnamanagh, particularly the Mayberry Road, experiencing heavy, backed-up traffic on a daily basis.

Last Saturday, the ongoing issues with traffic and mobility in the area were heightened when work was carried out at the entrance to Kilnamanagh on the Greenhills Road, which saw motorists stuck in long tailbacks in both directions.

Tallaght Central Labour Party councillor, Mick Duff, told The Echo: “I was one of the many affected by this traffic chaos, and it took me 40 minutes to get from Tymon North to Tallaght Village due to the traffic on the Greenhills Road, which had spilled out onto the surrounding roads too.

“These unannounced road works are causing traffic chaos on the Greenhills Road, which is the main artery into Kilnamanagh and into Tallaght from the city, and vice versa.

Cllr Duff believes that the absence of electronic signage, placed ahead of the roadworks to give people sufficient time to take an alternative route, added to the mayhem – alongside a lack of prior notification.

“The absence of signage warning motorists of the road works ahead, in sufficient time, meant that tailbacks were inevitable”, Cllr Duff said.

“I am calling for South Dublin County Council to insist that contractors must be obliged to set out electronic notice boards, detailing where the works are being carried out and notifying all road users that delays could be expected.

“Also, as councillors, we are notified in advance by the council when road closures or major works are being carried out by the council or on their behalf.

“This allows us to inform our constituents via social media and other means, give them a heads-up.

“I see no reason why we cannot be notified in advance by contractors, informing us of traffic works that may cause disruption.
“People living in Kilnamanagh are already exasperated over the ongoing road works and I think Saturday was the icing on the cake.”

When contacted by The Echo, the council stressed that the works were being carried out by a private contractor on behalf of Amazon Ltd in Kilnamanagh and on the Greenhills and Airton roads.

A council spokesperson said: “The council has granted a Licence to the contractor to allow him to proceed with the works. This provides details of restricted work times, technical details in relation to underground services, health and safety requirements and road reinstatements. Responsibility for liaison with the public rests with the contractor for the scheme.”

A response from the contractor was not received before going to print.