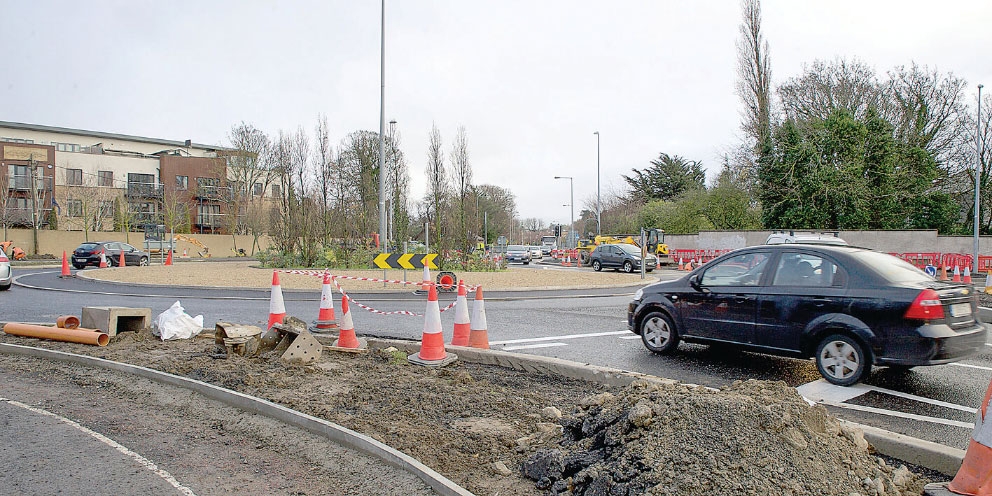 TRAFFIC jams on the roads leading up to the Orlagh roundabout in Knocklyon, which increased following the roundabout being reduced to one lane for the construction of a cycle lane, has been caused by “very poor weather conditions” and motorists looking at the roadworks, according to South Dublin County Council.

Construction work began on the installation of a shared cycle and pedestrian way leading to the Orlagh roundabout in July, where traffic was then reduced to a single lane on approach to the roundabout, which it is believed is now leading to traffic tailbacks in the area.

Orlagh roundabout is reduced to one lane

As reported in The Echo, an online petition by Independent councillor for Rathfarnham, Deirdre O’Donovan, calling on the council to reinstate the two-lane approach to the roundabout, has gained traction in the community – at the time of going to print, over 3,600 people had signed the petition.

Paul Foley, a Fianna Fáil councillor for Templeogue-Terenure, tabled a motion at Tuesday’s (December 11) monthly meeting of the Rathfarnham/Templeogue-Terenure Area Committee where he stated that he had carried out a road traffic survey earlier this year and identified the Orlagh roundabout area of Scholarstown Road as “one of the more serious traffic bottlenecks” in the area.

Cllr Foley added in his motion that the new road layout has “plainly exacerbated” traffic issues, stating that “the redesign of Scholarstown Road and the Orlagh roundabout has clearly not worked. This requires immediate action.”

When contacted by The Echo, a spokesperson for South Dublin County Council said: “Roads Design and Construction acknowledge that there have been delays at the roundabout, which has caused public disquiet.

“We feel the reason for the delays are that there have been very poor weather conditions recently, which slows traffic considerably, and an additional amount of delay is caused by drivers slowing down to view the roadworks.”

The spokesperson stated that the council had carried out a drone survey earlier this year and found that “the two lanes on the Scholarstown Road Eastern Arm were rarely used and when they were, they caused conflicts”.

The construction of the shared cycle and footpath is being designed to “provide an alternative to the private car”, according to the spokesperson, and when the work is completed by the end of this week they will “monitor the works to determine if they are working satisfactorily”.