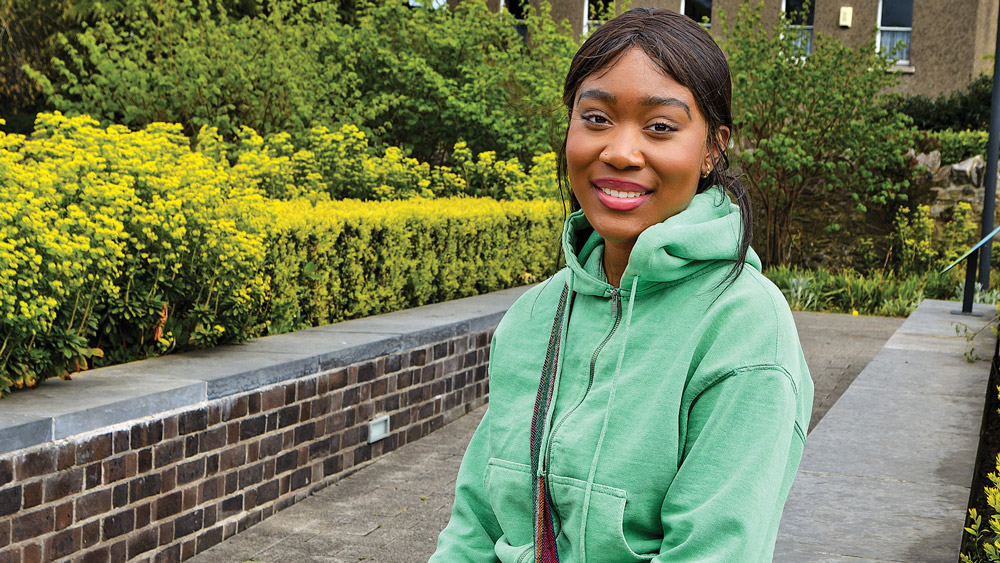 Victory Luke: Future plans for a book of poetry

A passion for crafting affecting poetry began for Victory Luke when she was in her early teens as a student in Collinstown Park Community College.

Now aged 19, Victory, who grew up in James’ Street in the Liberties before moving to Coldcut Park in Clondalkin when she was 11, recently performed one of her poems at a Covid Commemoration Ceremony in Clondalkin.

The talented writer’s poetry traverses numerous topics, such as identity and sense of place, while she deftly etches emotions into her surroundings through her prose.

Victory told The Echo about her first foray into poetry in her early teens, what it meant to her to perform one of her poems at the Covid Commemoration Ceremony, and her future plans to write a book of poetry.

What age were you when you wrote your first poem, and what was it like?

I remember that, at first, I didn’t like poetry. I wrote my first poem in 1st year, so when I was about 12 or 13. I found it difficult to condense my thoughts, since I was so used to writing long stories.

It took me a very long while to get used to the idea. I wrote it alongside a writing workshop at my school called Inklinks, and with a lot of help from [poet and co-founder of Inklinks] Colm Keegan.

Reading his poetry really inspired me to try a bit harder at the craft.

Once I got used to the idea, it was so freeing – it really taught me the saying ‘less is more’.

Was there a particular point when poetry switched from being an interest into being a passion?

I can’t really say. If I had to think, I suppose it started one day when I wrote something that was very personal to me.

I opened up about something very deep and a light switch must have turned on, because, after that, it transformed the way I dealt with the world. Suddenly my feelings, thoughts, sounds, people in my life and my surroundings could be turned into images and words.

It became another language I could use to understand all of it. As a pre-teen, and now a young adult, that’s very important.

You recently performed your poem ‘Church Bells’ at a Covid Commemoration Ceremony in Clondalkin. How did you feel when you were asked to do this, and what was the experience like for you?

I was nervous at first. I’d done spoken word only twice before. Once when I was at school, and the second time was at college.

The reception was lovely and everyone was very receptive and kind towards my work. It’s a poem that I hold dearly because it describes my home the way I perceive it.

Your poem ‘Tale of Two Tongues’ seems to grapple with living somewhere new and feeling like you’re expected to leave your old traditions behind. What did you hope to convey with this poem, and what feedback have you received about it?

This was the second spoken word project I mentioned before. It was for a college society event called ‘The Udoma’.

It aimed to bring together students that came from minority groups in a safe place. It was a spoken competition so I chose a poem.

The topic of discussion was about identity and what that means to you and, as a woman of colour born to immigrant parents, it’s something I often think about. I wanted to convey the feeling that a lot of Black people, or people of colour or immigrants of any kind, may feel when it comes to our identity.

Ireland is where I was born and, although it’s not a perfect country, I love this place dearly.

But I also honour where my ancestors came from, and the culture they’ve also given me.

Your poems traverse numerous topics. Do they tend to come about as a stream of consciousness, or do you make deliberate decisions to write poems about particular topics?

I tend to write poems that come from a place of extreme feeling.

Every poem I’ve written was inspired by an overwhelming feeling of love, an image, place or person.

I always have my notes app with me and start writing wherever I am. So, sometimes it is a stream of consciousness, other times it’s because of something that’s been gnawing at the back of my mind.

What plans do you have in the pipeline for your poetry, and where can people go to find out more about your work?

I plan to write a book of poetry by the end of the year. It will be a draft that I can then further edit and perfect.

I haven’t got any websites or anything set up for my work, but I did do a piece for Poetry Ireland with Jane Hanlon and the poet Seamus Cashman called ‘The Lampshade’.

It was aimed at Leaving Certificate students and published in the Irish Independent. It was a few years back but I still remember it to be a brilliant experience.