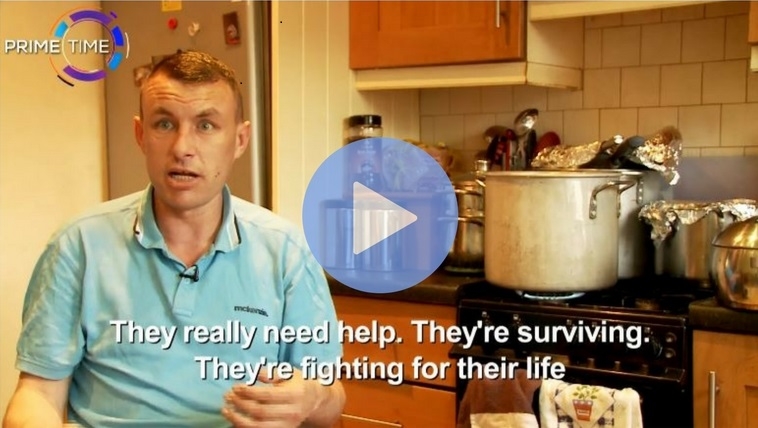 VIDEO: Mother and son cook up “Ballyfermot Coddle” twice a week for the homeless

A soup run volunteer and his mother spend two nights a week cooking up their famous “Ballyfermot Coddle” to feed the capital’s ever-growing number of homeless people and rough sleepers.

The Ballyfermot man and his mother Brigid were featured on RTÉ’s Primetime Digital Exclusive on Wednesday, where they talked about their work, some nights serving over 300 people in need of a warm meal.

Brigid Murphy helps her son prepare the tasty coddle and said volunteers often form a close bond with the homeless: “I’m going in with him about a year now and I love it. I love the people, they’re lovely people.

“Every single one of the volunteers all form a bond with them.”

The Echo.ie previously spoke to Peter in June when he slept rough for a week to highlight the homeless crisis.

Peter will undertake the challenge again from November 15-22 and sleep rough for a week-long vigil in the city centre, where he will be doing video updates on his Facebook page throughout the vigil.

According to Brigid, Peter (31) has even gone as far as to give somebody availing of his soup run a new pair of runners.

Peter spoke about the dire situation homeless people are facing: “They really need help. They’re surviving. They’re fighting for their life from the minute they wake up until they go to sleep at night…that’s the reality of it.”

Brigid told RTÉ that she could empathise with homeless people, having experienced difficulty paying her mortgage in the past.

She said: “I could have been out there a few years ago. I fell behind on my mortgage when my kids were small. And I found it very hard to catch up on that.

“So I know it is very hard to try and play catch up.”

To read more about Peter’s upcoming sleep-out, pick up this week’s Echo.