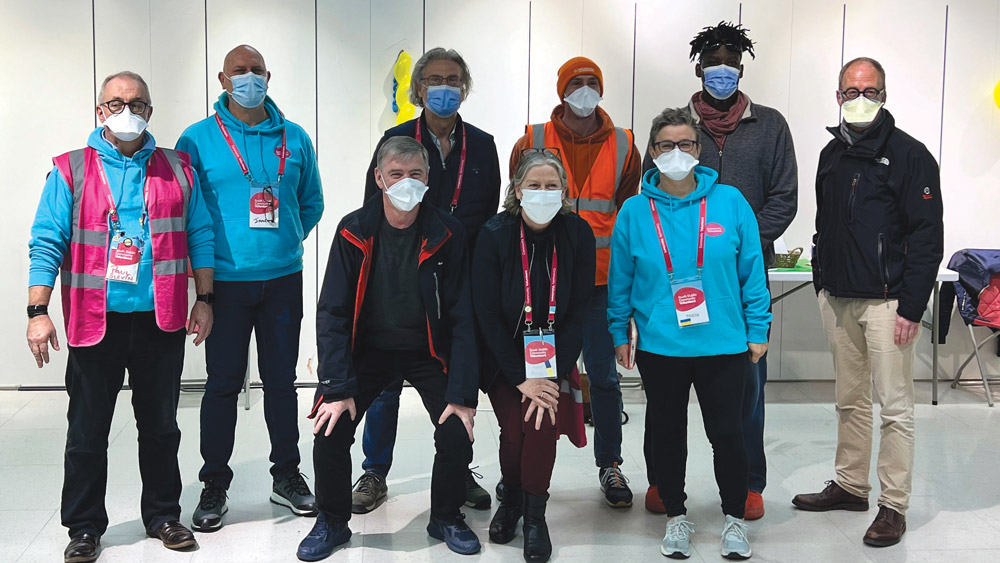 Tricia Nolan with some of the South Dublin Volunteer Centre

Volunteering round the clock helping refugees

VOLUNTEERS who won two awards for their work during the pandemic are back in Citywest in 24-hour round the clock action helping Ukrainain refugees.

The South Dublin Volunteer Centre won the awards at the All-Ireland Community and Council Awards last weekend, in recognition of their work during the Covid-19 pandemic.

Volunteers from the centre acted quickly at the onset of the pandemic, where they volunteered at the testing centre in Tallaght Stadium and, later, in Citywest for testing and vaccination.

“The awards are more about recognising the volunteers themselves than the volunteer centre, and it recognises the effort they’ve put in,” Tricia Nolan from the South Dublin Volunteer Centre told The Echo.

At present, the volunteer centre has a team of 200 volunteers working in Citywest on a 24-hour, seven-days-a-week basis to help displaced people arriving from Ukraine.

“We weren’t at the awards ceremony because we’re providing a 24-hour service here in Citywest,” Ms Nolan explained.

“It’s tough work and more emotionally draining than when we were doing vaccinations, when the work was more physical, and it’s long hours, but it’s really rewarding.”

Reflecting on the volunteers winning the two awards last weekend, Ms Nolan said that, while she was pleased about the award win, it’s the impact that the volunteers have on the ground that matters the most.

“It was fantastic to win the awards,” she said, “and I don’t want to sound glib, but yesterday there was a note left on our desk by one of the displaced people from Ukraine, saying ‘Thank you for your help’, and that means more to us than any awards.”