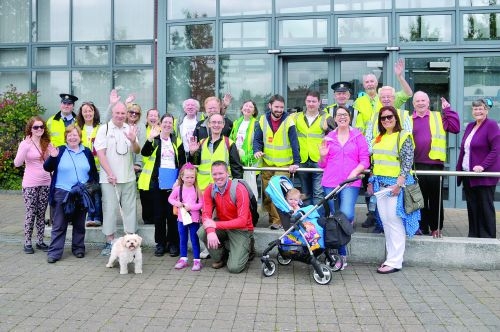 OVER 60 hikers from Clondalkin made their way along the Grand Canal to Celbridge on Sunday, August 9 as part of the inaugural Slí Chrónáin Mochua walk.

The walk took them from the 9th Lock at Clonburris to Gulliardstown Bridge, two kilometres beyond the 12th Lock.

Monica McGill, a member of Rally Round The Tower, created the walk to commemorate the founder of the monastery in Clondalkin, St Crónán Mochua, who also established a settlement in Celbridge.

Monica told The Echo: “Apparently, there was an ancient tradition of going on pilgrimage from Clondalkin to Celbridge on August 6 for St Crónán’s Feast day.

“After weeks of rain, St Crónán swung it with the Weather Angel. It was a perfect day for walking and a great community occasion.”

One hundred walkers from Celbridge also joined the Clondalkin group at Gulliardstown Bridge to mark the re-establishment of the pilgrim path with the planting of a native hawthorn tree.

Chairperson of Rally Round The Tower, Bernardine Nic Giolla Phádraig, was presented with a copy of A Road on the Long Ridge by Cara Geissel, daughter of the book’s author Hermann Geissel.

The book describes Slí Mhór, which Slí Chrónáin Mochua is a part of, and will be placed in the Round Towers Visitors’ Centre when it is constructed later this year.

Over €1,500 was raised in donations and sponsorship for the restoration of St John’s Church as part of the walk, with welcome home refreshments and tea waiting for the walkers in St John’s school hall after they returned from their journey.

Latest News: Emergency homeless will no longer be sent to ‘Bloodbath’ B&B…

NEWER POSTDid you miss any of the main stories from the last week? Right this way…
OLDER POSTLocal crime writer to release fourth novel