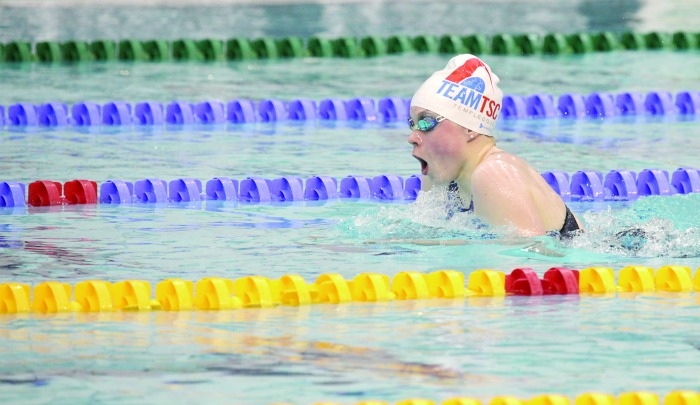 Walshe stars yet again for Templeogue

Indeed she will be coming into this event off the back of breaking an Irish Junior Recordat the recent Leinster Short Course Championships en route to winning the overall women’s award.

Walshe completed the 200m Butterfly in a time of 2:13.20, subsequently breaking Sycerika McMahon’s 2011 record and posting a new two-second improvement on her own PB.

She also won the 400IM and 50BF Skins event while helping the relay team to two silvers in the Mixed competition.

She will be one of seven competitors from the Templeogue club heading to Stockport – the largest number of club team athletes selected for a representative team in recent years.

Walshe’s sister Hannah (13), who finished fifth in the Leinster 400m IM, won bronze in the same 200BF event, marking the first time the siblings have been on the podium together.

Cara Osing (13) won bronze in the Women’s 200FC and finished fifth in 200BC while recording PBs in other events.

Brothers Sean (13) and Joe Kenny (15) were locked in a battle for sixth place with the younger brother getting the touch, while both set substantial new PBs.

Joe had produced a stellar fourth place and huge PB in the 1500FC earlier in the session, with Traolach McKnight (18) in sixth.

Evan Rossiter (15) was pleased with his fourth place in the 800FC and two additional finals in the 200BC (eighth) and 100IM (seventh) to cap off a strong opening racing weekend of the year.

There were impressive swims from younger ath-letes also as the team contested 246 heat swims and 70 swims in finals.

Meanwhile at the Leinster Graded Gala the Templeogue Team boasted some 32 athletes in action, producing some great developmental swims and big PBs.

The team continues to prepare for the Leinster Distance Meet on the same weekend where some 42 will be racing, while a squad of 14 have qualified to travel to the Irish SC Championships in Lisburn from December 2-4.