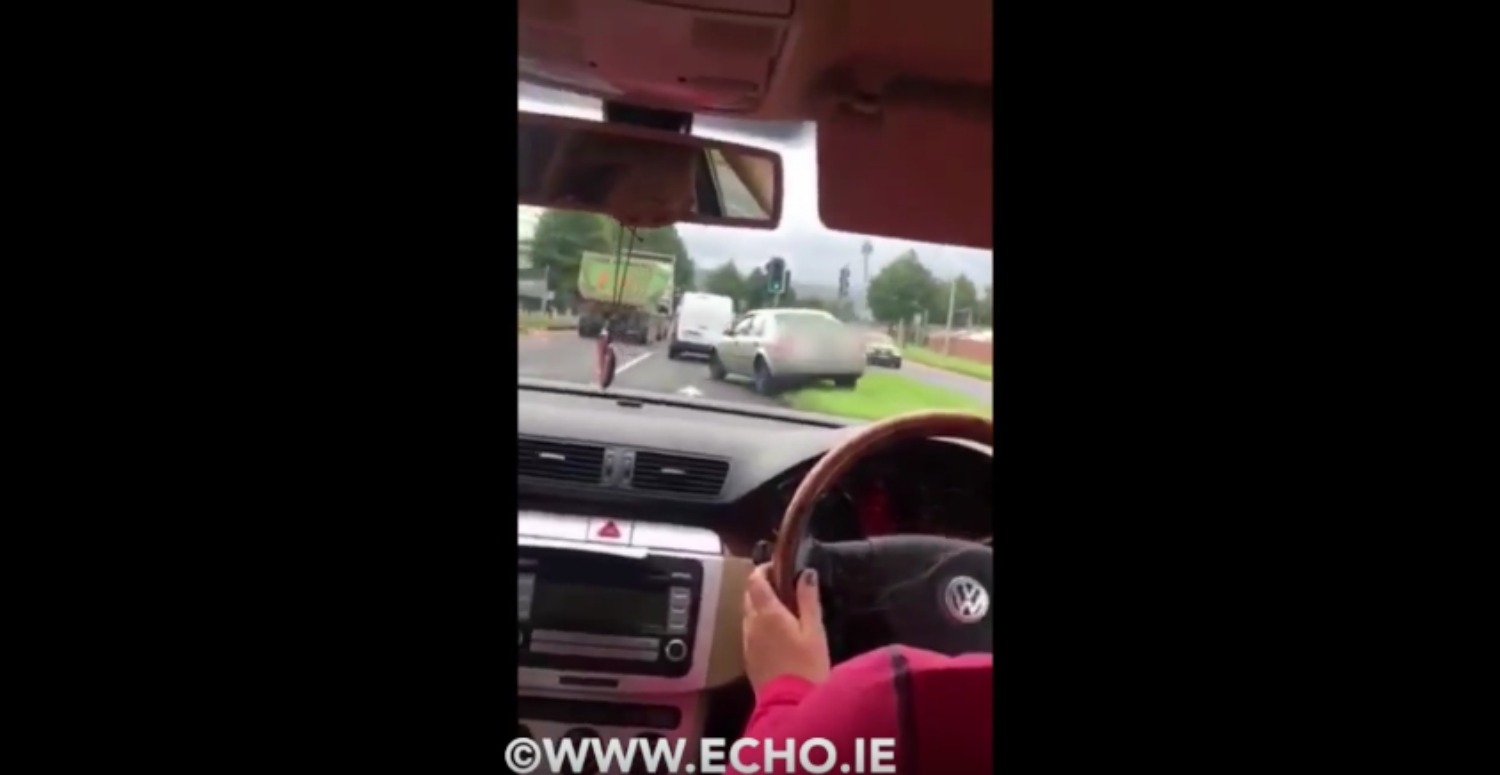 Gardai are investigating an incident that occurred on the Belgard Road on Monday afternoon that saw a female driver pursue another car after the driver allegedly crashed into her and failed to stop at the scene.

In video footage obtained by the Echo, the driver of a silver Ford Mondeo can be seen dismounting the concrete island after allegedly hitting Siobhan Carroll’s car.

The video has been viewed more than 8,000 times on social media, with many commending Ms Carroll for her actions.

According to the Tallaght mother, she pursued the car down the Mayberry Road and onto the Greenhills Road, before the vehicle turned right onto the Tymon North Road.

“When we reached the petrol station on the Tymon North road he pulled into the garage and we thought that was it, but as we went to get out of our car he took off again,” explained Ms Carroll.

“I know full well I should not have went after him, and I know people will say what we did was dangerous, but it was just pure instinct.

“Why should he be allowed get away with it? I just wanted him to stand in front of me and apologise and offer to pay for the damage to my car, but he just wanted to get away.”

As soon as the crash happened Ms Carroll said her daughter, a passenger in the car, rang Gardai, and remained on the phone to them as the pursuit continued, with the hope that they would arrive and apprehend the man.

“We thought the Garda would be there in a minute, and I never intended on chasing him for so long, but there was no sign of them, and when he left the garage in Tymon we just kept going,” stated the Tallaght mother.

“When we got to the top of the Tymon North Road I thought he was heading for the M50 and I was about to stop but he went into Glenview so we went after him.

“He went past the shops and came back onto the Main road before mounting the path at the Borza in the village where he eventually forced his way through to go back down the Greenhills Road.

The damage to Ms Carroll’s car

“When we got around the corner there was a truck waiting to turn and we could not see beyond it so we stopped.

“I don’t know who he is, and I don’t know what was going through his head, but I would have been willing to sort it out with him, whatever way he wanted.

“People who know me know I would help anyone who is in difficulty, but you can’t just go around crashing into people and think it is ok not to stop.”

A Garda spokesperson confirmed to the Echo that “Gardaí at Tallaght are investigating a traffic collision which occurred on the Belgard Road, Tallaght at approximately 12:55. The driver of one of the vehicles failed to remain at the scene”.