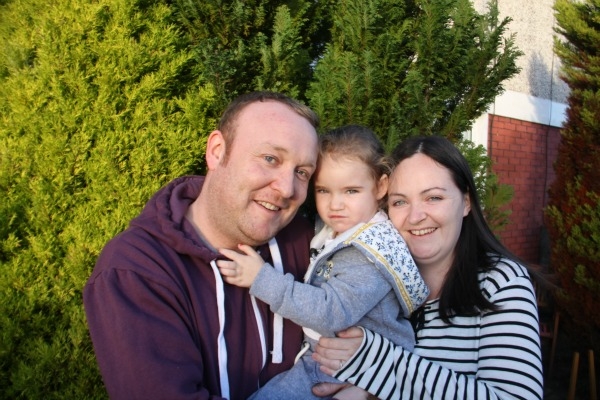 THE family of a Tallaght toddler who lay in a coma for ten days after a fall, has thanked the community for its support and prayers – which they believe contributed to the three-year-old girl’s recovery.

Little Katie Young from Kiltalown fell down a few steps on the stairs before Christmas, an accident which saw the energetic performer admitted to Temple Street Hospital.

Her grandmother Eileen, with whom Katie, her parents and older sister live, told The Echo: “Katie was in her aunty’s house and it was just a simple fall. She seemed fine after.

“However, about 30 minutes later she started throwing up so she was brought to Tallaght Hospital.

“A triage nurse in Tallaght said that he didn’t like Katie’s colour and to bring her to Temple Street, and this is where they discovered that she had a bleed on the brain.”

Katie was put into a medically induced coma for ten days, with the family believing that they were going to lose Katie a number of times.

“It was an unbelievably hard time, we were in shock – to go from seeing Katie singing and dancing every day to lying in a hospital bed nearly destroyed us.

“We felt so helpless and were told that if doctors tried to operate, Katie could lose her speech and the movement down one side of her body.

“Katie’s story ended up being shared online and the reaction we got was so heart-warming.

“Every day we’d get home from the hospital and people would have left prayers, relics, holy medals, bags of food and flowers on our doorstep – some of the gifts were even from people that we didn’t know.

“Members of the Travelling community also left us a beautiful picture of the Sacred Heart.”

Eileen added: “I am not really a religious person, but I believe that all of the prayers, kind words and actions of friends, neighbours and strangers helped us through – and I believe it got Katie through too.”

After ten days in a coma, doctors attempted to wake Katie up.

Eileen said: “We didn’t know what was going to happen, all we knew was that if she did wake up she would have some level of brain damage.

“We couldn’t believe it when she opened her eyes and now she’s home and walking and talking.

“However, due to the bleed, Katie now has epilepsy and has regressed a little, she’s back in nappies and her buggy and tends to repeat things.

“However, because she is so young, she can start to learn again.”

Eileen added: “We got so much support from the community both here in Tallaght and online that we wanted to let people know how Katie is doing and to say thank-you from Katie, her mam and dad, big sister and the rest of her family – everybody was amazing.”

Friends of the Young family have organised a fundraiser in the Jobstown House on Saturday, January 30, to raise money for Katie’s medical bills and ongoing treatment and physio, as the youngster is not eligible for a medical card.

Everybody is invited to come along for an entertaining night of Lip-sync battles and a bumper raffle, which was kindly supported by local businesses.