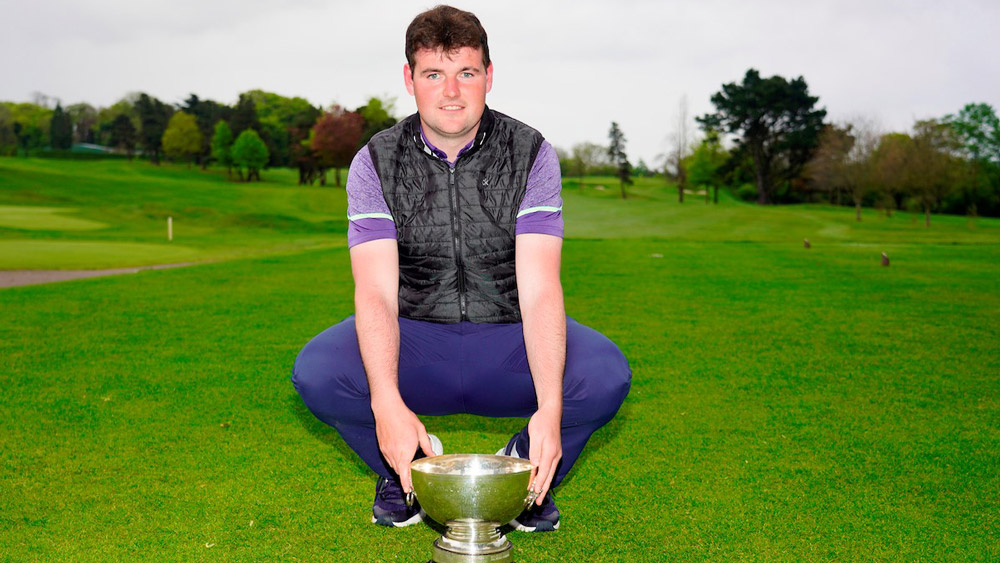 The former Newlands and Slade Valley GC man, who lifted the Mullingar Scratch Trophy last year, laid the foundation for another big triumph at the weekend when he carded early rounds of 64 and 69 to open up a five-shot advantage.

And he followed that up with another strong showing on Sunday morning that saw him chalk up four birdies on his way to a round of 68 after which he shot a further four birdies along with three bogeys as he closed out the tournament with a round of 71 for a total of 16 under.

It was more than enough to see him fend off the challenge of closest rival Gary O’Flaherty who kept up the chase with a final round of 67 that saw him complete his campaign on nine under.

Joshua Hill of Galgorm Castle emerged third on -6 and, as the top Under 25 player in the event, he scooped the Carr Bruen Trophy.

Speaking about his performance on the closing day in Cork, Whelan admitted “It was hard to know what to do today.

“I wanted to get off to a fast start, but only had one birdie in the first six holes. I was bogey-free this morning, which really helped in the afternoon.

“I played well on Saturday morning, when I went early. It made going out in the afternoon far easier.

“I love playing parkland golf. I find it more predictable than I do on the links courses” he added.

The victory leaves Whelan on a sound footing ahead of the upcoming Flogas Irish Men’s Amateur Open Championship taking place at The Island Golf Club from May 12-15.

“I haven’t played the course since they made the changes, so I’ll try and get out there before the competition” said Whelan.

“If I can play tee to green like I did this week, I’ll be happy” he insisted.