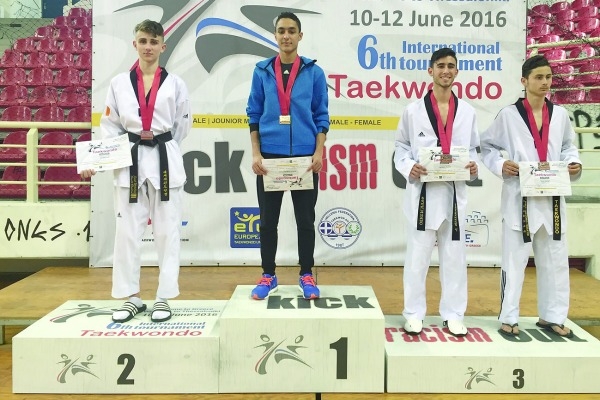 Woolley back on the international podium in Greece

JACK Woolley won silver in the most recent edition of the World Taekwondo Federation ranking event series when he travelled to Thessa-loniki in Greece.

Only a week after the South Dublin Taekwondo star picked up the same colour in Austria, he and his team were hopeful of maintaining that momentum in their bid to secure a high finish in the massively competitive -54kg division.

Woolley’s draw led him to a quarter final outing against Cyprus National Team Player Pantelis Dimou whom he stopped just 40 seconds into Round One when the Dubliner had a 10-point lead.

This win set him up for a semi final clash with recently-crowned European Presidents Cup Champion Ovidiu Trifan of Romania.

Not fazed by his opponent’s latest feat, Woolley started the match with an onslaught of kicks and brought an early close to the contest at the end of the second round as the score gap exceeded 12 points.

Now guaranteed at least a silver the 17-year-old was hoping it would be ‘third time lucky’ when he drew, for the decider, Number One seed Armin Hadipour Seighalani of Iran whom he fought in two finals previously (Croatia & UAE).

The 21-year-old Iranian, who has never once been beaten in his career at -54kg, maintained his golden streak winning the title by 13-2.

Woolley travelled to Greece with his Club and National Coach Robert Taaffe who commented shortly after the event, ‘I know Jack is gutted, but as a coach it is not a bad place to be if your player is annoyed at a silver at a Ranking event.

“The scoreline flattered the Iranian. Jack was in the game throughout and we were unlucky a few new strategy attempts were delivered excellently, but didn’t quite register the correct impact requirements. “Armin is Number One in Iran where there are millions of fighters, with Taekwondo on national TV like ‘Match of the Day’.

“He is a full time professional athlete, he just won the Rio test event and the Asian Championships. We barely have a few cents to rub together, but we are on his tail.

“We travel to the best tournaments to face the best fighters, and a loss is only a loss of there is nothing learned” he insisted.

This year Woolley has contested nine events and has reached the podium eight times.

“He is the most active player in World Taekwondo currently, and being able to keep up his consistency and no injuries, touch wood, is a testament to his mind-set and efforts of his support coaches’, concluded Taaffe.

The Tallaght lad will now take a competitive break for a few weeks before he travels to the next ranking event in Luxembourg.

In the interim he travels to the Finnish Olympic team training camp in Helsinki where he is a training partner of two-time Olympian Suvi Mikkonen.