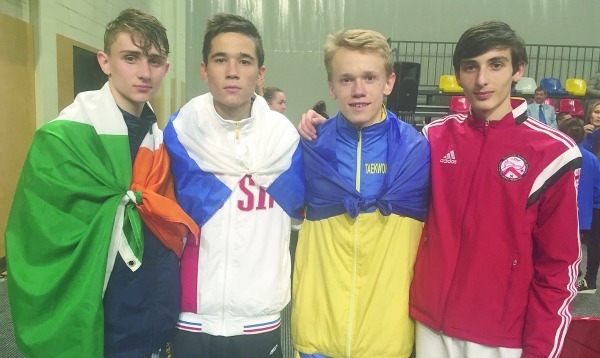 JACK Woolley of South Dublin Taekwondo brought to an end a glittering junior career by taking silver at the Junior European Championships in Daugavpils, Latvia.

Lining out in the youth section for the last time, the 17-year old fought five matches in the -55kg division.

With no seeding in Junior events, the draw is always a bit of a lottery and Woolley saw off local Daniel Likovs of Latvia in what proved a comfortable warm-up match that he won by the end of the second round on the 12-point score rule.

And it was another trouble-free performance for the Tallaght lad both in the last 16 and quarter finals as he despatched Bulgarian Martin Garkov and Spain’s Juame Torrens Guardia respectively before the close of regulation time.

With the rest time between matches now becoming much shorter, meaning less time to recuperate, Woolley and Coach Robert Taaffe returned to the holding area to prepare for the semi final challenge of Oleksly Malyeyev from Ukraine who, like Woolley, had been defeating his previous opponents with substantial points differences.

It was to prove a nailbiting affair that ended 19-15 in favour of Team Ireland as the Ukranian appeared to run out of steam.

With Woolley now in the final, he was drawn head to head with Russian Kirill Kuchyanov who had clinically made his way through the opposite side of the draw.

The match was a complete roller coaster, with Woolley falling behind before re-gaining a six-point lead.
But with the two very similar kickers racking up points against each other, Woolley found himself three points behind in the closing 10 seconds, and pulled it back to an agonising 25-24.

The whole room held their breadth at the last second of the match when the South Dublin TWD star landed a strong punch, but it was not to be, as the blow did not register before the clock stopped, and he had to settle for silver.

Both players were given a rapturous applause for what was one of the ties of the tournament and brought the curtain down on the four-day event.

Woolley’s performance would not have been possible had he not been joined by his team mate and sparring partner Conor Deery from Junsa Taekwondo who also competed in the -45kg division under the watchful eye of Irish Team Coach Stuart Russell.

Deery saw off Ukranian opponent Mark Volyno before being edged out 10-9 in the quarter finals by Spain’s Joan Jorquera Cala in another high-paced and action-filled match.

This was Deery’s first major event as a Junior and he was one point away from the possibility of finishing on the podium, which at this level is a fantastic achievement.