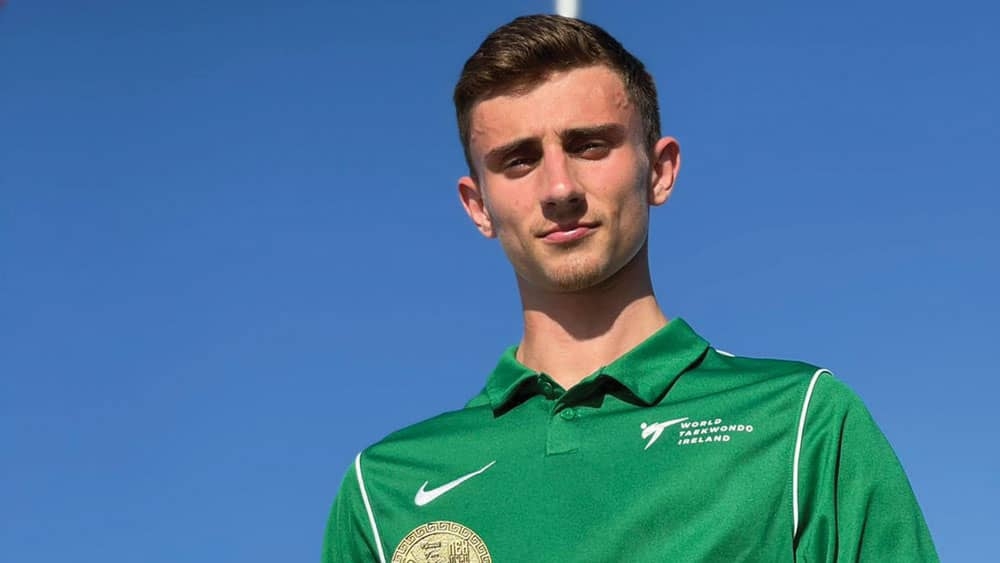 IN WHAT will likely be his last time in the competitive taekwondo octagon before this summer’s Olympic Games, Tallaght’s Jack Woolley wrapped up this Olympic cycle’s open international tournaments in superb fashion.

The 22-year-old closed out a busy few weeks of international travel and warm weather training by finishing on the top tier of the podium at the prestigious Mexico Open Taekwondo Tournament.

Woolley was joined by his Coach Robert Taaffe, and training partner Leroy Nsilu Dilandu as the trio undertook the challenge of travelling to the Pan-American region.

Seeded Number One in his -58kg division, the two-time Echo Sports Star of the Year was handed a bye through the opening round of competition.

In the Round of 16 he was met with the challenge of Dominican Republic’s Geraldo Rodríguez, their clash beginning at a slow pace before Woolley quickly moved up the gears and brought the match to an end after two rounds on a score of 36-9.

A quarter final encounter with Venezuelan Yohandri Granado was now on the cards and had promised to be a taxing encounter with the tall strong South-American, yet Woolley emerged an 11-9 winner.

Now into the medal rounds, the South Dublin Taekwondo star was next pitched against current World bronze medallist Paulo Melo of Brazil.

In full momentum Jack closed out the match in dominating fashion, winning 29-12, and subsequently setting up final encounter with home favourite, current world silver medallist and Pan-American champion Brandon Plaza of Mexico for the top prize.

The Mexican, renowned for his aggressive style which cannot be contained by many, played his part in a gruelling contest that saw Woolley dig deep to produce a 25-18 victory for Ireland, his sharp shooting kicks proving most devastating.

Speaking after the success of his protégé, South Dublin Taekwondo Head Coach, Taaffe said “Jack was in strong form at this tournament.

“Pan-America is a very tough place to come in Jack’s weight class. It poses a different challenge and requires a lot of focus.

“Jack overcame many challenges at this event. He was beaten by two of those boys in 2019 and it has been a great benchmark to review progress.

“There are some over here who Jack could potentially meet in Tokyo. He is looking strong and back to full fitness after a recent time caring for some knocks.

“We spent a week in Fuertuventura the week before with Jack’s taekwondo support team to acclimatise to the heat and with two weeks solid training away before the Mexico Open, along with the gold medal win, it has been a great way to bring tournaments to a close before departing to Tokyo next month.”