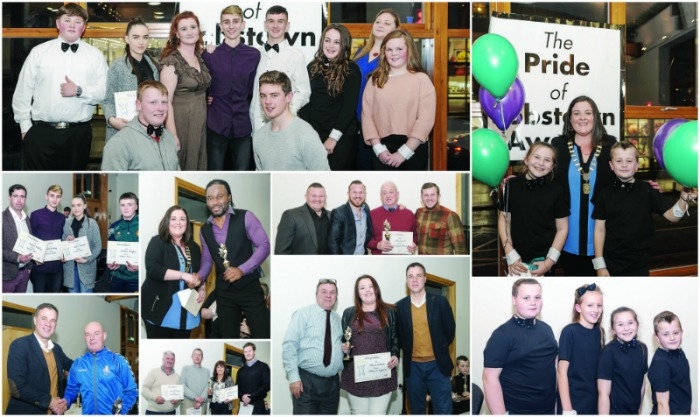 Young people intent on making a difference in the local community

JOBSTOWN’S younger generation has once again proved that anyone, regardless of their age, can make a difference, when they staged the Pride of Jobstown Awards last Friday.

The Little Monsters Youth Club in Jobstown were the organisers behind the awards ceremony, which recognised 40 nominees for making a difference in their community.

The diverse list of nominees were spread across the categories of Volunteer, Neighbour, Teacher, Community/Youth Group, Sports Star, Sport Coach, local Business and Making a Difference – with four additional awards presented under Special Merit, Special Recognition, Positive Role Model and One to Watch.

According to the Little Monster’s Youth Club, the night, which was staged in Tallaght Stadium, was an “opportunity to recognise and show appreciation for the time and effort people take in making a positive difference to those around them.

“All of those nominated, and indeed many who are not named, are winners in our eyes and we are proud of them.

“May they continue to motivate, support and be role models.”

The community of Jobstown has produced an army of heavyweights who are making a difference across a wide range of areas, including education, sport, youth and environment – not forgetting those who promote community development, support and friendship on a daily basis.

The turn-out on Friday also shone a spotlight on the impact that growing up in Jobstown has had on many of its success stories, with sports stars such as Paddy Holohan, Shamrock Rover’s Stephen Bradley and the Hyland brothers all present on the night and proud to promote and support their Jobstown roots.

Winners on the night were selected by an independent panel of judges who came from the Public Participation Network (PPN), Tallaght Community Council (TCC), Shamrock Rovers and the South Dublin Volunteer Centre.

The Little Monsters, who themselves should be applauded for a fun night which celebrated all that is great about their area, also thanked South Dublin County Council, Foróige and Carraig Donn for their support.

Visit the Pride of Jobstown Facebook page for more.