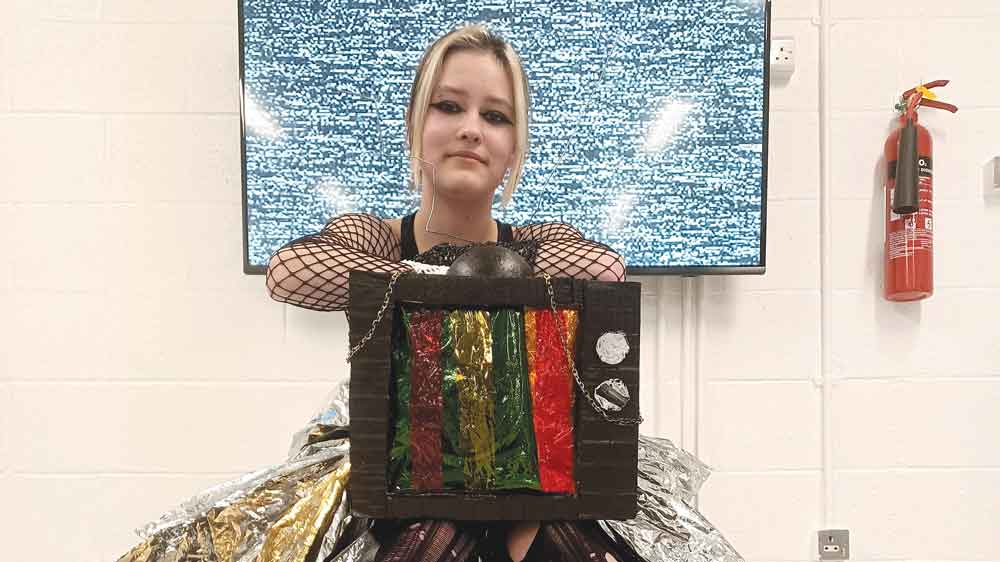 A TRANSITION year student from Old Bawn Community School made it to the final of the Junk Kouture competition last week, with her creation called ‘Ex Static’.

Junk Kouture tasks post-primary pupils with creating high-end designs and then creating them entirely out of recycled materials.

Zuzanna Cieslewicz, 16, from Belgard, created ‘Ex Static’ using a variety of materials, such as insulation foam, plastic shopping bags which she crocheted into gloves, wire which she used to make a corset, and masking tape and cardboard.

Explaining part of the idea behind her design, Zuzanna told The Echo: “I decided to make a TV head because TVs are made up of all of the shiny metals and plastics that you see in garbage piles.”

Zuzanna initially didn’t want to enter her design into Junk Kouture, but decided to take the plunge after being encouraged to do so by her art teacher, Vita Ryan. 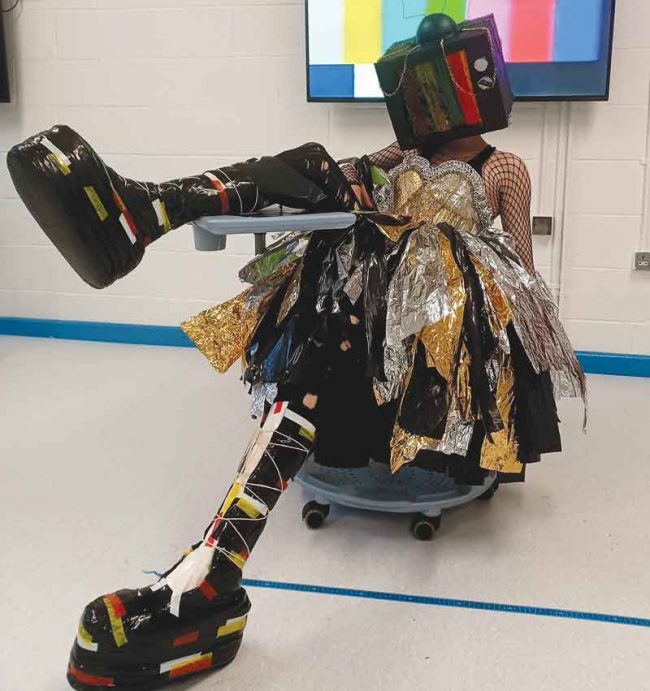 Zuzanna explained: “Entering Junk Kouture was the most prominent option for me, because I really like art, but I wasn’t going to submit it.”

Vita added: “Zuzanna was quite concerned about the competition aspect of Junk Kouture, but when she ended up making something for the joy of it, she really got into it.

“She’s exceptionally skilled and I think entering her design gave her a bit of extra confidence.”

Last Thursday, Zuzanna modelled ‘Ex Static’ in the Bord Gáis Energy Theatre for the All-Ireland final of Junk Kouture, and was helped by her classmate Cara Webber in advance of going on stage.

While Zuzanna said she found the experience of waiting to go on stage “nerve-wracking”, she enjoyed the overall experience and, according to her teacher, came alive on stage.

“When we got to the Bord Gáis, the energy was palpable,” said Vita.

“We got to see the backstage of the theatre and we had our own room, and Zuzanna got to meet creative students from other schools.

“For Zuzanna to be acknowledged for her work was brilliant, we’re all so proud of her.

She absolutely came alive when she was on stage.”

The next stage of the competition consists of the broadcast of the final on RTÉ 2 at 7pm on Thursday, May 19, after which viewers can vote for a wild card entrant on RTE’s website HERE.