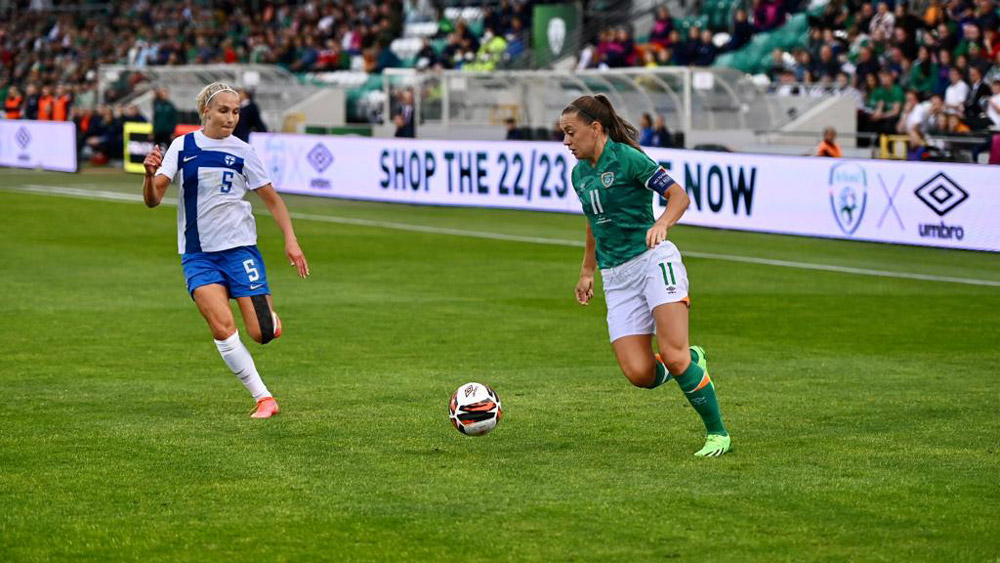 Lily Agg grabbed a crucial 54th-minute goal at Tallaght Stadium this evening as the Republic of Ireland women’s national team confirmed their spot in the FIFA World Cup play-offs with a 1-0 win over Finland in a Group A qualifier.

Thanks to the three points picked up in front of a record crowd of 6,952, Vera Pauw’s side can’t be caught by the Finns and are guaranteed to finish second behind table-toppers Sweden.

There is a final group game to come against Slovakia in Senec on Tuesday and another victory there could potentially give Ireland a stronger seeding in those forthcoming play-offs.

Having spent much of the campaign operating at left wing-back, team captain (and Kilnamanagh native) Katie McCabe was redeployed in an attacking role for the visit of the Finns to Tallaght.

Another ex-Peas star in Amber Barrett was named on the bench alongside Aine O’Gorman – the current captain of the Newcastle club.

There was a massive air of expectation coming into this game for Ireland, but there were some signs of nerves in their ranks during the early exchanges.

Finland were able to find space inside the final-third and McCabe was forced to clear off the line after Natalia Kuikka had directed the ball towards goal off a fourth-minute corner.

While Ireland did settle to an extent, Finland were comfortable in possession and Ria Oling forced a save from Courtney Brosnan just shy of the first-quarter mark.

Although Diane Caldwell headed against the crossbar off a set-piece move on 26 minutes, Quinn was adjudged to have been out of play when she nodded on Megan Connolly’s delivery.

Brosnan’s outstretched arm subsequently came to the rescue of Ireland after a Finnish effort deflected off Megan Campbell, before visiting netminder Tinja-Riikka Korpela denied O’Sullivan and Heather Payne towards the end of the opening period.

Ruesha Littlejohn was forced off through injury in the first half, but Agg made a pivotal impact in her place.

Ireland had gone close to breaking the deadlock four minutes after resumption with Korpela producing an acrobatic stop to prevent Elli Pikkujamsa heading into her own net off a customary long throw by Campbell.

The Girls in Green had certainly increased the tempo of their play, however, and the partisan home crowd were sent into raptures when Agg rose highest to head home Connolly’s perfectly weighted free-kick.

This put Ireland within sight of the result they craved and Payne was perilously close to doubling their lead as the action progressed.

McCabe also fired just wide of the target moving into the final-quarter, but Brosnan had to be on her toes to gather a curling strike from Emma Koivisto.

Finland did push for an equaliser in the closing moments, but Ireland kept their composure and the final whistle was greeted with an outpouring of emotion both on the field and in the stands.