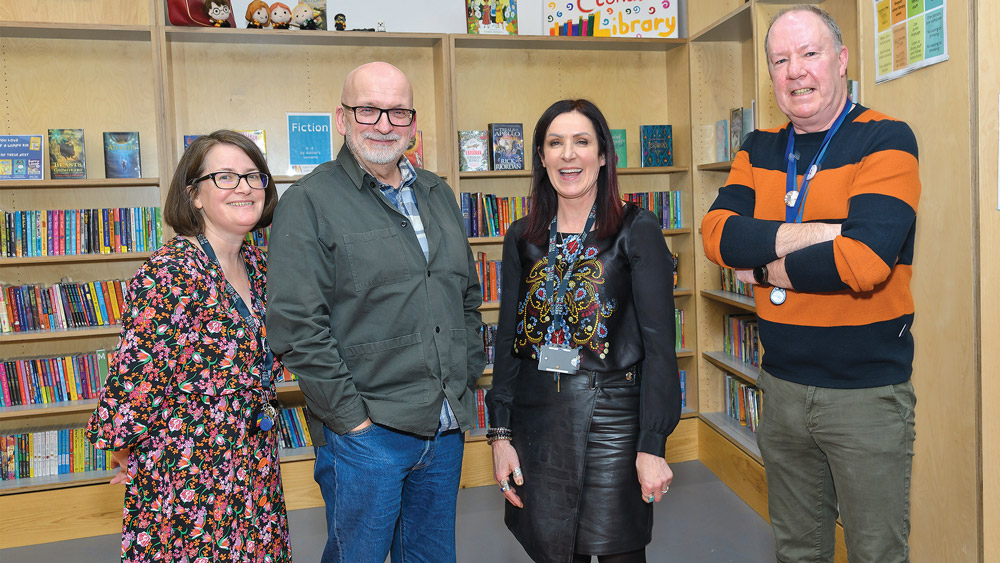 ‘An Evening with Roddy Doyle’ caps off celebration of his works

THE culmination of a community initiative celebrating the work of author Roddy Doyle was marked with a visit by the author to North Clondalkin Library last Friday.

The Rowlagh Reads Roddy initiative was led by the North Clondalkin Library and saw people in Rowlagh and surrounding areas read Roddy Doyle novels over the past two months.

Adults read ‘The Barrytown Trilogy’, while children in local schools and book clubs read ‘Brilliant’ and ‘The Giggler Treatment’.

Many of the adults and children got a chance to meet Roddy Doyle in the library last week, as a celebratory way of capping off the hugely successful initiative.

On Friday afternoon, the author delivered a film-script writing workshop for local schoolchildren, and later that day he was interviewed in an event called ‘An Evening with Roddy Doyle’.

Sean Rafferty, a member of staff at North Clondalkin Library, interviewed Roddy Doyle for the event which had a full capacity audience of over 120 people.

Helen McMahon from North Clondalkin Library told The Echo that Roddy was “a generous and quietly funny interviewee.

“He delighted the audience with stories including one about when visiting his wife in the Rotunda Hospital, he passed the on-location film set of ‘The Snapper’, and about developing a Cork accent while working with Roy Keane on the footballer’s autobiography.”

Mayor Emma Murphy then presented the celebrated author with a limited edition, signed print by local artist Jess Tobin which referred to Barrytown – the fictional

town where several of his novels are set.

“The otherwise unflappable Roddy was genuinely and visibly moved by this,” added Ms McMahon.

Attendees were treated to refreshments after the event, and a performance from The Cotton Club Quartet with a setlist composed of hits from ‘The Commitments’.

“Roddy Doyle’s work is neither simple nor ordinary, but his books speak to ordinary Dublin people celebrating their lives, their struggles and joys. He is an absolute star.”