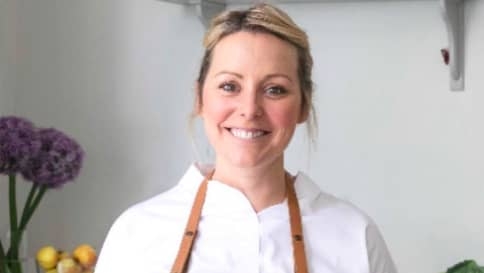 Anna to cook up a storm

A TALLAGHT chef is gearing up to take part in a new mid-morning show on the BBC, called Morning Live, at the end of this month.

Old Bawn native Anna Haugh has been based in London for several years, where she worked for chefs including Gordon Ramsey and Philip Howard, before opening up her restaurant, Myrtle, in Chelsea last year.

However, Anna’s first taste of cheffing began when she worked under Derry Clarke at l’Ecrivain on Baggot Street, shortly after she graduated from DIT.

She went on to continue training in Paris and then settled in London, but has always had a passion for bringing Irish dishes wherever she goes – and is a proud Tallaght woman who has incorporated honey from Dublin 24 into some of her restaurant’s dishes.

Anna, a past pupil of Presentation in Terenure, saw success with her London venture and started getting TV work, and has appeared on shows including the BBC’s Saturday Kitchen and Channel 4’s Sunday Brunch.

When asked how being in front of the camera compares to her work in the kitchen, Anna told The Echo: “I don’t really mind it, as long as I’m just cooking or talking about food.

If someone’s asking me stuff to do with my job, then that’s fine.”

Anna was asked to be part of the BBC’s new mid-morning show, Morning Live, where she will work on the food element of the show, delving into the science behind food, cooking on a budget, and all manner of food-related topics.

“The sky’s the limit,” added Anna. “It’s so exciting and the ball’s rolling very fast. I can’t wait!”

As for any last-minute nerves about being on live TV, Anna said: “I’ve accepted that every time I do something where I push through that nervous feeling in my stomach, where I feel like I want to backtrack, I’ve always been rewarded.”

Morning Live will begin airing on October 26 on BBC One every weekday at 9.15am, and further details about Myrtle Restaurant can be found at myrtlerestaurant.com.