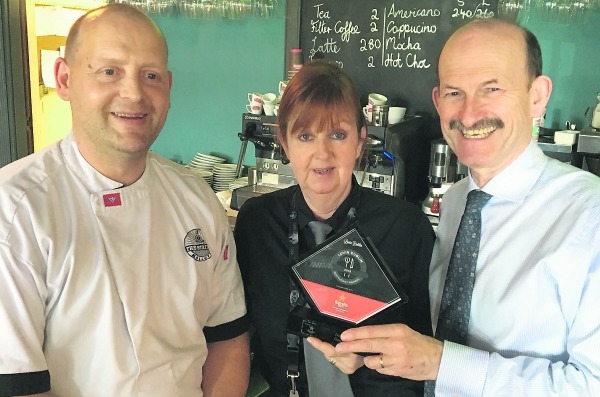 Best Gastro Pub award to The Station at Molloys

THE STATION at Molloys has won Best Gastro Pub in this year’s Lovin’ Dublin Awards held last Tuesday, May 3 at the Morrison Hotel.

Now in their third year, the Lovin’ Dublin Restaurant Awards celebrate the best of what our city has to offer – and have become benchmarks of quality when it comes to casual dining, cool atmosphere and innovation in the Dublin food scene.

Richard Molloy, director of Molloy Group said: “We are delighted to win the Lovin’ Dublin Award for the Best Gastropub in Dublin. We were up against the best food establishments in Dublin including The Bull and Castle, The Camden Exchange, The Exchequer, The Porterhouse. The Taphouse and more, so it was an amazing achievement to win.

“We strive to be the best at everything we do and this award is a great reward for everyone in the team who has worked so hard in an effort to provide the best possible experience for the customer.

“I want to thank the whole team from general manager Fran Worrall and his team, to the restaurant manager Laura Walsh, and all the waitresses, to head chef Frank Grunberg and his team of chefs and all the kitchen porters for all their hard work.”

The idea was to create a quality food experience in a cooler more modern environment at a reasonable price.

Their head chef, Frank Grunberg, came to them with a wealth of experience after years of working in the FX Buckley restaurants and all their meats are sourced directly from FX Buckley’s Butchers.

“Customers have said our steaks are the best they’ve ever had and our chicken wings have been getting rave reviews. Aside from the ribs, wings, steaks and burgers we have a diverse menu catering for all tastes, including vegetarians. We pride ourselves on maintaining the quality of every dish we serve.”

The name The Station comes from the fact that the old Blessington to Dublin Tram used to stop outside the pub and so people used to wait in the pub for the next tram to arrive as if it were the Tram Station!