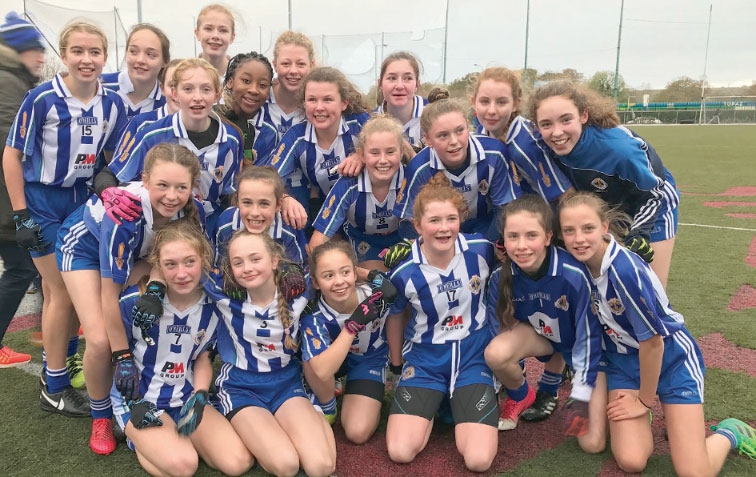 BALLYBODEN St Enda’s Under 13 Girls Football team finished off the season in style after they beat St Brigid’s 0-8 to 2-7 to land the Division One Cup in Russell Park on Saturday.

Both teams had won their equivalent home fixture in the league campaign – a league that had been won by Ballyboden before the summer in a play-off against Lucan.

Brigids continued to press, with Boden finding it hard to get out of their half, but the defence held firm with Megan Deignan, Emma Jane Weir and Sadie Codd clearing their lines.

Good link-up play between Clodagh Reid, Sarah Gleeson and Leah Cunningham resulted in a first point for Boden through Caoimhe O’Sullivan before they took the lead with two more points.

Brigids responded strongly with four points, all from play, to propel themselves into a 0-6 to 0-3 advantage by the halftime break.

And the Blanchardstown side picked up in the second half where they left off in the first, converting a free to make it a four-point game.

That advantage was halved as Kate Donaghy fired two balls between the posts with Brigid’s scoring a point after Ella Connolly’s shot was tipped over the bar by the Boden keeper Shauna Feely.

Boden got the break that they were hoping for midway through the second half when an attack was finished off by Aine Rafter with a fist over the Brigid’s goalkeeper.

Now with the lead for the first time, the Boden girls were still finding it difficult to convert their chances until Leonie Power fired one over and Ella Reid punched the ball to the net this time from a pass by Hannah Byrne.