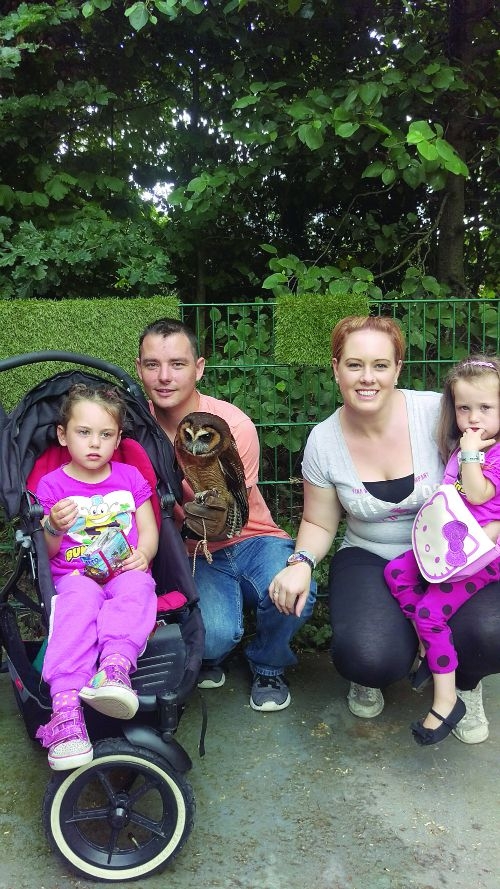 A BEAUTIFUL four-year-old from Tallaght has been diagnosed with a rare and fatal brain disorder called Battens disease, making her one of three known children with the neuro-degenerative disorder in Ireland.

Little Abbey McGuinness started to have seizures last December and was put on medication while doctors examined the cause of her perceived epilepsy.

However, after a number of scans, and on learning that a family member had died from Battens disease 30 years ago, doctors diagnosed Abbey with Battens disease, a disorder which will see Abbey lose her motor skills, sight and eventually be bed-bound with a feeding tube.

Despite the prognosis, Abbey’s brave parents, Linda and John, and her two-and-a-half year old sister Kyra have been trying to enjoy every day with Abbey and create memories for her and themselves to hold onto.

Linda told The Echo: “We don’t know how long we have left with Abbey, the doctors are unable to say if it will be six months or six years.

“Not a doctor in the world can tell us how long Abbey will live for but a lot of children with what Abbey has don’t live past 12.”

She added: “Battens disease is passed down through the genes and in the 1980s, my husband John lost an eight-year-old cousin to the disease.

“It’s a very rare disease and as far as we know there are currently only three children in Ireland who are diagnosed.”

Currently Abbey, who loves to play, can’t walk more than ten feet without having a seizure, so she has to sit in a buggy if she is leaving the house – with the brave girl, who goes to Early Steps Pre-school in Kilnamanagh, susceptible to 150 seizures a day.

“Getting this diagnosis was a nightmare for our family and we do have our sad days”, Linda said.

“However, the unbelievable support we have received from the community is keeping us going and getting us through.”

She added: “Not a day goes by when we don’t get a gift dropped in for Abbey, sometimes off complete strangers, a caring message or a call, we really are overwhelmed by people’s kindness.

“The staff in our local Hickey’s Pharmacy in Springfield have been unreal and I got a call recently to say that the staff are doing the charity challenge Run-A-Muck in Abbey’s name.

“People say that there’s no good left in the world and that all you hear is bad news, but I see plenty of good and it’s in the amazing people who surround my family every day.”

The family is also receiving support and respite from Bees for Battens, a charity set up by BUMBLEance couple Tony and Mary Heffernan who sadly lost two children to Battens.

In order to raise awareness and funds for Bees for Battens, Linda and John are taking part in October’s Run-A-Muck with 130 family and friends.

They have encouraged members of the community to take part for a great cause or visit the Bees for Battens Facebook page for donation details. Bees for Battens can also be supported by texting STAR to 50300 to donate €4.