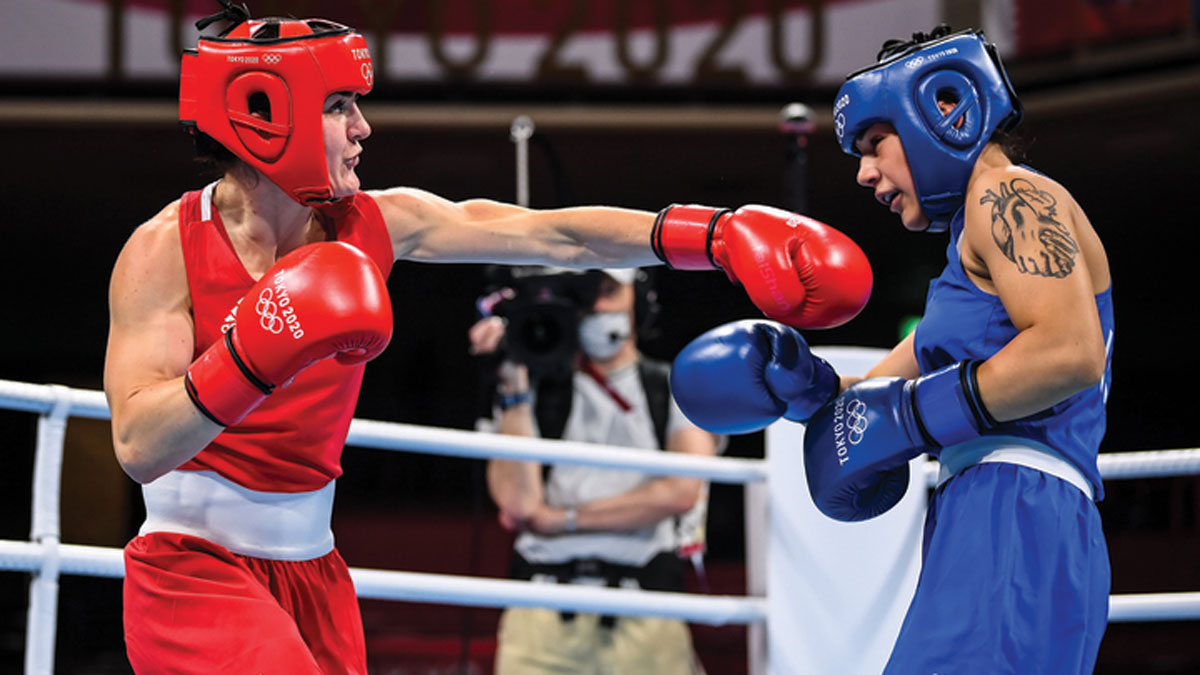 KELLIE Harrington’s coach at St Mary’s Boxing Club in Tallaght, Noel Burke insists the newly crowned Olympic champion has made the right decision in staying amateur rather than opting for a potentially lucrative move into the paid ranks of the sport.

Harrington, made known her decision to turn down offers to go pro, when interviewed on Friday night’s Late Late Show, and Burke is fully behind that move.

“I was absolutely delighted. It’s fantastic for Irish boxing” he told The Echo.

“For her, it suits her. She can live the life that she wants to live which is so important.

“You’ve got to be happy in what you’re doing if you want to be successful and that’s why she made that decision.

“She’s had a fantastic time and she can continue on the route that she’s on.

“Sport Ireland really want her to stay and they’ve helped her.

“She’s a leader, so they’re delighted to have her around.”

At 31-years-old Harrington was one of the more experienced campaigners on the Team Ireland squad in Tokyo and Burke is in no doubt that she has the potential to enjoy another successful Olympic campaign in Paris in three years’ time when she’s 34.

“Improving is what she does every week” insisted Burke.

“She’s never stayed the same, she always wants to improve, so there’s more to come.

“She’s developed really well over the last few years and there’s more things we can work on.

“She’s a very intelligent athlete and if she thought she wasn’t capable of it, she wouldn’t be making this journey.

“She’s become a lot more physical over the last four or five years and that’s given her another dimension to her boxing.

“Her performances in Tokyo were absolutely textbook.

“Obviously the homework had been done on everybody in the division so there were no shocks.

“It was just about watching the form of someone coming in as they were boxing out there.

“And everyone has to step up on the day. All the homework in the world can be done and it’s usually occasions that get to people and prevent them from doing what they’re really capable of, but that didn’t happen there.

“Kellie’s very focused and she’s a mature athlete. She’s not going in there like a rabbit in headlights.

She’s been there and done it. You can’t buy experience.

“And her weight division was by far the strongest at the Olympics, male or female.

“The strength in depth in that division was fantastic.

“There were so many boxers in there with a chance of medalling.

“In a lot of weight divisions, you can kind of pick out, more or less, who’s going to come away with a medal, but in that one, you were looking at Kellie, the Brazilian [Beatriz Ferreira] and so many other girls” he pointed out.

Looking ahead to the next possible challenge for Harrington, Burke said “There is a World Championship at the end of November.

“For me, she doesn’t really need to do that.

“She’s done a lot, especially with qualification having been so close to the Olympics itself this year.

“She got gold in qualifying too, boxed brilliantly in that.

“It was very busy, there was a lot on. She went into the Olympics soon after and had to raise her game again.

“You don’t want to be going to the well too often in the one year, but look, we’ll see how it pans out.

“Obviously she always wants to box.

“An athlete always wants to be in the ring.

“They get itchy after a couple of weeks and they want to be back in there.

“But we’ll see how it goes.

“It hasn’t been decided on yet.”

Speaking about the effect Harrington and her diligent attitude has on all the boxers in St Mary’s, Burke continued “Everyone in the club is over the moon to see someone who works so hard and puts so much in get what they really deserve.”