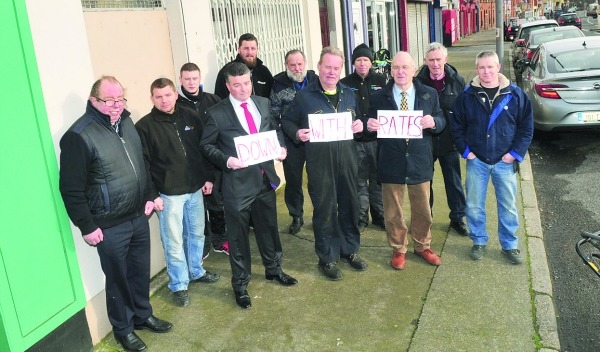 BUSINESSES in Inchicore have vowed to tackle “out of control” commercial rates, which they say is “crippling” the area and stunting economic growth.

The Inchicore Business Group have blasted increasing commercial rates, with some hiked by 100 per cent and another, Motor Factors on Emmet Road, forced to close after their rates increased by 132 per cent.

Businesses pay an annual rates fee to the Valuation Office, which can vary in cost.

The rate used to include services that have since been privatised such as bin collecting and water charges – another bone of contention for businesses struggling to pay bills.

Spokesperson for the business group Simon Pallister says the Valuation Office made a mistake with their valuations in Inchicore but “refuse to admit it.”

“A simple mistake was made but they are not prepared to do anything,” said Mr Pallister.

“Cash-strapped businesses have not got the resources to gamble on an expensive appeal.”

After gathering 600 signatures for a petition to have rates reduced, the group were assisted by Labour TD Michael Conaghan, but the response from the Taoseach’s was of “no help”, according to Pallister.

He said: “The complete indifference by the Taoiseach’s office to get involved means that the valuation office is out of control and wiping out businesses all over the state. If rates were reduced, premises would re-open and councils would generate more revenue.”

Stan Charles, a former paramedic, runs a lawnmower repair shop on Emmet Road, and has a rates bill of €6,245 with arrears bumping that up to €8,900.

“If things go the way they are, I’ll have to shut up shop and move to a warehouse,” said Mr Charles, who took over the business from his father William.

“I’m in Catch 22,” he said. “I have state contracts, but if the rates aren’t paid, I can’t get a tax clearance certificate. My rates went up 40 per cent, but with two premises and 12 trucks taxed and insured, I can’t afford it. We can’t even take on an apprentice anymore.”

James Smith from Premier Motor Cycles appealed a €450 to €1,050 hike in rates but got “no response” whilst John O’Sullivan from National Auto Parts feels “margins are squeezed” for a business that employs 20 people.

Karl O’Byrne, from O’Byrne Hire, says his €9,000 rate is the same as Naas Road but his Camac Close business contains “no passing foot traffic.”

Colin Dardis, from C&G Motors said: “The one thing I get from rates is nothing. It acts as a deterrent for new businesses to open in the area. We needed a yellow box outside the industrial estate on a busy junction for public health and safety, but it was refused.”

A spokesperson for the Valuation Office said they conducted a rate valuation and “some were higher and some decreased.”

“The valuation is set by the VO but it is the elected members of the council who estimate the rate,” said the spokesperson.

A spokesperson for Dublin City Council’s rates office did not respond to queries by The Echo at the time of going to print.

Simon Pallister has pledged to continue battling an “unsustainable system the demoralises the business community” and encourages businesses across the county to contact him at 087 6408619.

NEWER POSTFree parking proves not to be free as motorists get clamped
OLDER POST‘Get into trouble again and I will put you away,’ judge tells teen (16)