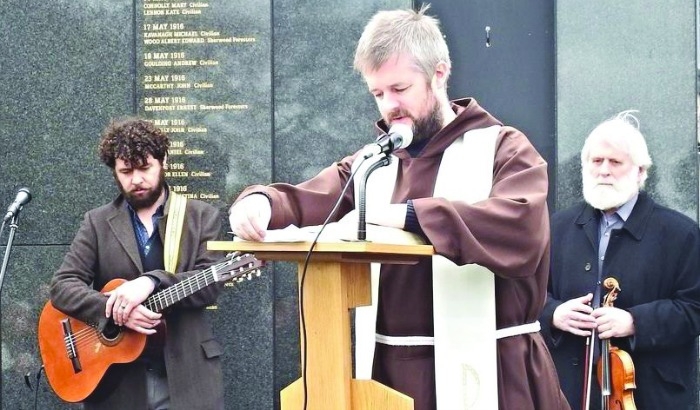 GROWING up in Kilnamanagh in the seventies Capuchin Brother Bryan Shortall was part of a break-dancing crew called the Street Warriors.

Today, Bryan, who has given up the break-dancing, is part of a different band of brothers, who are out on the streets in a different way, caring for the capital’s homeless.

At the age of 18, Bryan joined the Capuchin Franciscans, an order which serves the community through parish work and through the Capuchin Day Centre, which feeds nearly 1,000 homeless people each day.

Alongside caring for the city’s homeless, Bryan (47), who has a book based on his blog being published before Christmas, is also the parish priest in St Michan’s, which is the parish of the Fruit and Vegetable Markets, in Dublin’s North Inner City.

This week, Bryan took five to speak with The Echo Newspaper.

What do you remember about growing up in Kilnamanagh?

We had a very successful Kilnamanagh Summer Project in those years and people of my generation have very happy memories of it.

It really brought the whole community together. I remember two winning mottos of the summer project then were; ‘In the project, there’s never a reject.’ and ‘Families helping families.’

The kids who thought up those mottos must be in their 40’s now but well done to them, they were inspired.

Breakdancing was really popular back then and I was part of the “Street Warriors” crew with my brother, Kevin, who is now a teacher in St Aidan’s Community School, and a few other lads.

The “Floor Masters” were also from Tallaght and with other Breakers from all over the city we met in the Central Bank on Dame Street on Saturdays.

We wore baggy tracksuits, runners with double-width laces, and baseball caps with sponge pads inside them for head spins and windmills. Very important to look the part.

What guided you into the Capuchin brotherhood?

That’s a hard question to answer. I met some Capuchins when I was younger. I was spellbound by their brown habit, white cord, and bare feet. They looked like a cross between Obi-Wan Kenobi from Star Wars and Padre Pio. I joined in 1987 after my Leaving Cert when I was just 18. I hadn’t a clue. You know that ad; “Dear 18-year-old-me” We’ll, I wasn’t for talking to. I guess I just grew into it. That’s how a vocation grows. It’s percolating away in the background. It’s not natural, it’s super-natural.

Tell us a little about the Capuchin brothers?

The Capuchins are a branch of the Franciscan order founded by St Francis of Assisi. We were founded in 1528. We live in a community like monks although unlike monks we are moved around every few years.

We take three vows, chastity; poverty, and obedience. We don’t marry or have relationships. We share our resources with the other members of the order.

If we work in chaplaincies or in parishes and we draw a salary, the money goes to the order, we don’t personally benefit from it. And we go where we’re sent, our will is not our own.

Here’s one you may not have heard of; the Capuchins gave the name to Cappuccino Coffee. Look up Google for that story!

What does the Capuchin Day Centre do?

At our Capuchin Day Centre for Homeless in Church St. Brother Kevin helps nearly 1,000 people daily from Monday to Saturday who come for breakfast and dinner.

On Wednesdays, over 1,900 food hampers are given to those who call. There is real need today more than ever because many people are struggling.

But Kevin would readily admit that at the heart of the Day Centre which he helped to set up in 1969 is of ordinary people who send in donations, who run charitable initiatives, and who volunteer to help make a difference.

And many of the volunteers are young people who with their great sense of justice and fair play, want to help too.

Has the centre experienced an increase in demand in recent years?

The demand has increased. As well as providing hot meals for 1,000 between breakfast and lunch six days a week, there is a medical doctor, a nurse, a dental service, podiatry service, counselling, hairdressing, and showering, and clothing service.

According to Focus Ireland, there are 200 plus rough sleepers in Dublin, and over 6,000 people homeless in Ireland today.

In 1969, the Day Centre helped to provide somewhere for homeless men to go who left the hostels in the mornings. Today, this problem remains.

The Capuchin Day Centre Assistant Director, Teresa Dolan recently told me that ‘In the mornings, homeless families leave B&B’s or Hotels and may have nowhere to feed a baby or change a nappy.’

With winter approaching, what can people do to help the Capuchin Day Care Centre?

Brother Kevin takes donations, however small. The Government gives an annual subvention for €450,000 to help run the centre but its running costs are €2 million and increasing.

Br Kevin, Br Sean and their team are able to continue because of donations and volunteers.

You write a blog, what inspired it?

I started the Blog ‘Tired of all the Bad News’ about four years ago. I hear people saying that they are weary of all the bad news.

While we can’t deny people are struggling here and all over the country, indeed look around the world. We need to highlight the positive news too.

I try to keep it simple and relate some positive news stories. Look at the waiting list for people to volunteer for Br Kevin’s place for example.

Your blog is being turned into a book, tell us a little about that?

I submitted the Blog to Columba Press last year and they had a look at it and were interested in publishing it. I had earlier written a forward for another Columba Press publication on the life of St Padre Pio.

Anyway, it is hoped that it will be out and launched before Christmas time. Watch out for ‘Tired of all the Bad News’!

What has been the best piece of advice that you have been given over the years?

I’m not sure. I love aeroplanes and I took flying lessons when I was based in Cork. I had a Student Pilot’s License for a while.

I always remember this advice from the flying school: “The most useless thing in aviation is the runway behind you.” But one piece of advice from Jesus Christ himself; “Do not be afraid.”

What, for you, are the most important things in life?

Listen to people. Stay in contact with parents and family, they love you as you are. Take advice from older people, they have lived life.

Think of others more than yourself – this is the secret of happiness on the inside. Jesus Christ has the message of eternal life. Faith helps us to see in the dark.

What do you like to do when you get some free time? I read on your Twitter that you’re a Man U supporter?

My Twitter handle is @frbryanshortall so give us an ‘aul follow! I draw and write a little. I take photos of aeroplanes. You’ll find me on the far side of runway 10/28 in Dublin airport as much as I can with my air band radio and my camera.

I follow Manchester United because we lived in Rialto for a while in the seventies and growing up myself and my Brother, Kevin went to James’s Street.

There was a skin-head in 5th class who followed Man United and put it this way, it was better to follow Man U back then!

It’s nearly 30 years ago since you joined the Capuchins, looking back over the decades is there any moment that really stands out for you or changed you?

The days I baptized my nephew and three nieces. I’m so proud of them. The days I officiated at the weddings of my sister and brothers. I love them all.

As the winter approaches, Bryan has encouraged anybody who sees a person sleeping rough to let Inner City Helping Homeless, who are on the streets of Dublin city centre each night know at 8881804.

Visit www.capuchindaycentre.ie for more on how you can support the Capuchin Day Centre.