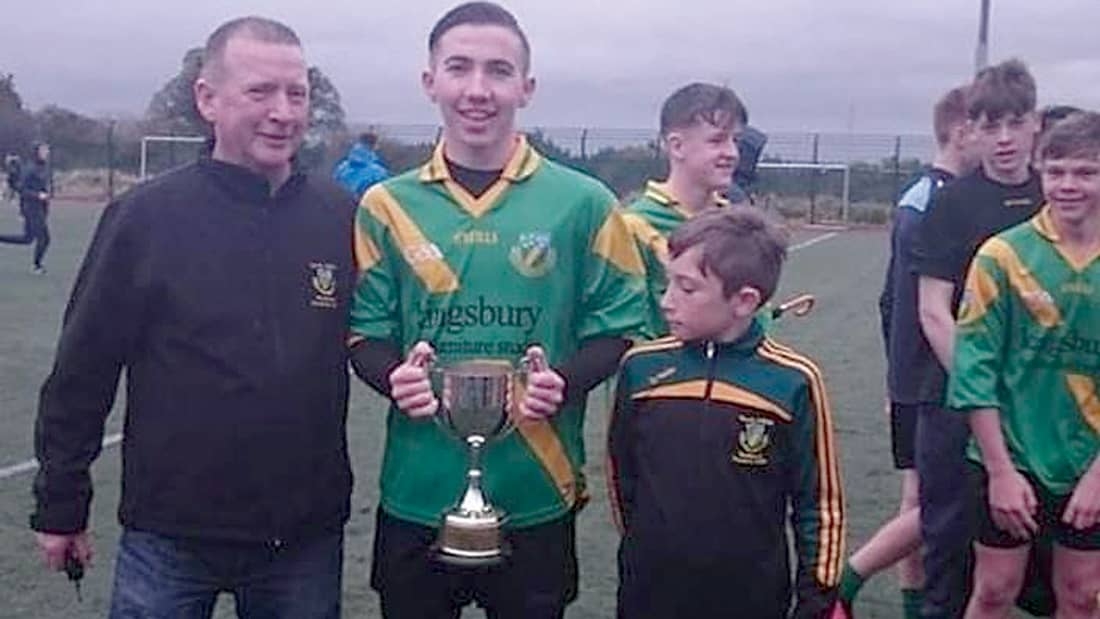 THE Tyrone and Ireland flags were raised at Thomas Davis GAA Club’s clubhouse in Kiltipper, as club stalwart and dedicated GAA man Cathal Lynch is being laid to rest.

Cathal passed away unexpectedly earlier this month at 56 years of age, and a minute’s silence was held in memory of the Tyrone man at Thomas Davis’ adult matches.

Cathal with his sons Rían and Fionn

Cathal was well respected in GAA circles – he was one of the founding members of the well-known Aidan McAnespie GAA Club in Boston – and his dedication to Thomas Davis for over 20 years was widely recognised.

He took on a variety of roles in the club and helped to shape it into what it is today.

Colin Brown, the club’s PRO, told The Echo: “Cathal had a big impact on Thomas Davis over the last 20 years.

“He represented a typical GAA ‘club man’ from all his voluntary work over the years, as a team mentor and in various club officer roles.

“Cathal was involved across all codes, in particular juvenile boys’ football and hurling teams.

“From the senior football panel that togged out last week in Parnell Park, 18 of the players would have had him as a juvenile mentor – which is a testament to the work he did in the club.

“Our current senior football captain, Eoin Kirby, would have been on Cathal’s first juvenile team that he took in the early 2000s.

“In a time when Thomas Davis didn’t have big underage numbers like we do now, he would’ve always done his best to get as many kids playing Gaelic games, no matter how good they were.

“It was all about participating and making friends.”

Cathal fostered a sense of unity in the teams he coached, and several of the players he trained went on to represent Thomas Davis at intercounty level with Dublin.

Explaining the club members’ reactions when news filtered through about Cathal’s sudden passing last week, Mr Brown said: “All at the club were deeply saddened when we heard the news on Friday.

“Hopefully the kind messages of support will be of some comfort to his wife, Carmel, and his children Rían, Keeley, Fionn, and all the Lynch/McGinty families.

“We have had tributes sent in from various GAA clubs all across Ireland, Tyrone and Boston over the last few days.

“Cathal will be remembered for many years to come on Kiltipper Road – we will raise the Tyrone and Ireland flag this week at the clubhouse as he’s laid to rest.”

Those who could not attend are invited to leave personal messages in the condolences sections of his death notice on RIP.ie.

NEWER POSTSDCC Development Plan: How can houses be built without contributing to urban sprawl?
OLDER POSTWoodie’s staff have raised over €260k for four Irish charities