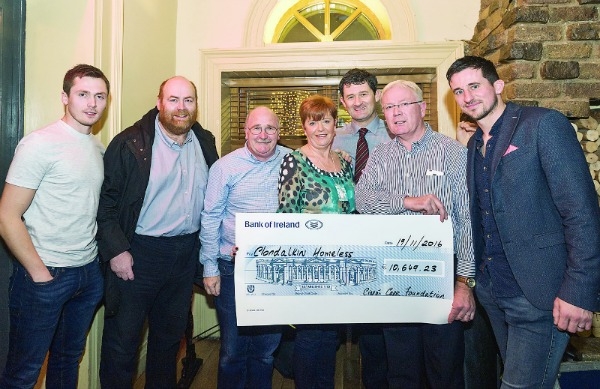 THE Ciaran Carr Foundation raised over €10,000 for homelessness in the community thanks to the annual 5k family fun run.

Over 800 people took part in the 5k run in October at Corkagh Park, raising funds for Clondalkin Helping Homeless.

A statement by the Ciaran Carr Foundation said: “A massive thank you to everyone who took part, participants and sponsors, in the fun run 2016 – €10,649 was raised overall.

“Big thank you in particular to Councillor Francis Timmons and the volunteers at Clondalkin Helping Homeless, their tireless work helps those in need on a nightly basis in our community.”

The cheque was presented on Saturday night in The Laurels pub in Clondalkin.

“The money will be spent on sleeping bags, tents, hats, scarfs, gloves and food. It will provide some warmth and comfort to those in need in the months to come. We are extremely grateful to everyone that contributed to making the 5K such a massive success.”

Ciarán’s parents Gemma and Philip, set up the foundation to prevent sudden cardiac death tragedies occurring in the wider community, after the tragic death of their son, who collapsed while training with Round Towers senior football team in 2012.

Previous events by the foundation, raised funds to place defibrillators in every school in Clondalkin and at publicly accessible locations in the community.

NEWER POSTMen’s Shed available but where does it go in Clondalkin?
OLDER POSTThe Irish Heart Foundation says you should check your pulse often