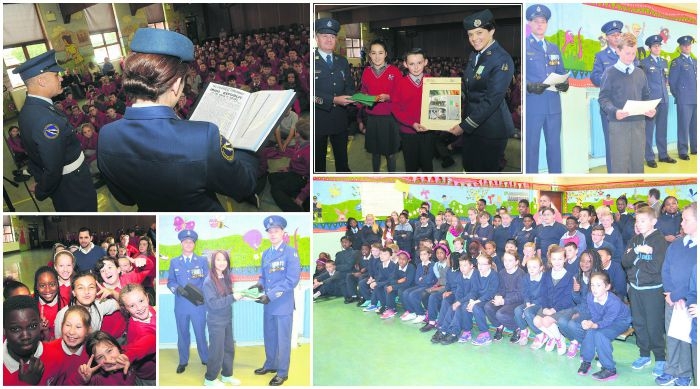 SCHOOLS in Clondalkin were among the first in South Dublin County to receive their Irish flags from the Defence Forces – as part of the nationwide programme to commemorate the 1916 Easter Rising.

The government has tasked Óglaigh na hÉireann – the Defence Forces – with delivering a national flag to over 3,200 primary schools in the country.

St Ronan’s National School and Scoil Nano Nagle each received a visit from members of the Defence Forces this week.

Schools in Tallaght, Lucan and Ballyfermot are scheduled to receive their flags from October onwards, deliveries being carried out on a phased basis around the country.

Each school will be visited by a small team, in uniform, and led by an officer or a senior NCO, who will formally present the national flag to the school in a special ceremony.

The Defence Forces are delivering a pack to each school, containing a booklet on how to care for the flag, a poster of Amhrán na bhFiann, the national anthem, and a poster of the history of Óglaigh na hEireann and the flag.

Students also take part in a reading of the Proclamation during a ceremony, which lasts no longer than 30 minutes.

The Defence Forces are playing a key role in the nationwide programme, including state ceremonial duties, and assistance to local authorities, schools and communities.

The initiative will culminate in Proclamation Day on March 15, 2016, where every school will raise the national flag in special ceremonies.