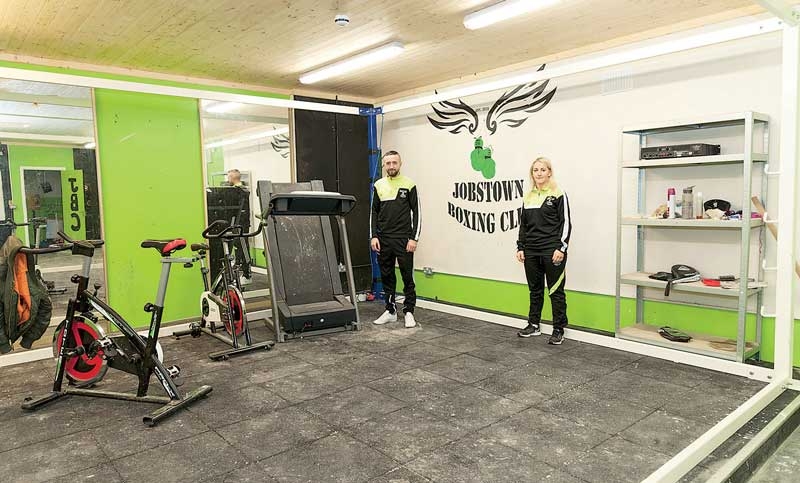 Club heartened by community support after blaze at facility

JOBSTOWN Boxing Club is starting the New Year on a solid stance after the community put its weight behind the club following a fire at the premises last month.

As reported in The Echo, an internal fire broke out in the attic space of the Kiltalown-based clubhouse on November 23, a blaze which caused severe damage to the facility – and resulted in more than 140 young members being forced out of their training hub.

The fire, deemed to be an electrical fault, was quickly tackled by Dublin Fire Brigade, which saved the clubhouse from complete destruction.

However, while the fire damage was confined to the attic, roof and ceiling, there was extensive smoke and water damage to the gym area.

In the wake of the fire, the club was inundated with offers of help from Kilnamanagh Boxing Club, Sacred Heart in Killinarden, Tallaght Martial Arts, Extreme Fitness, Jobstown Community Centre and others – which all offered the club shared training facilities until they got back on their feet.

St Thomas’s National School in Jobstown also offered support, and it’s been here that the club based itself in recent weeks.

Speaking with The Echo, club President Jerry Boyle also thanked South Dublin County Council, which had workmen on-site within two weeks, and local councillors, Cathal King (Sinn Féin), who has been supporting the club since 2015, and Mick Murphy (Solidarity).

“It’s very heartening to see potential disaster turned into such a good news story, and in such a timely fashion that disruption to club activities have been kept to a minimum,” Jerry said.

“We would particularly like to thank the local community who rallied to our support with many offers of help and financial contributions towards refurbishment and future premises development.”

Established in 2015, Jobstown Boxing Club has grown from 35 members to more than 140, who are aged between six and 18 – and who, despite losing their premises, won eight Dublin League Titles in recent months.

Head coach Amanda Spencer confirmed to The Echo that, thanks to the community’s support, the club house is on track to re-open in mid-January.

“People raised money through a GoFundMe page, there was a coffee morning organised and D&D Fitness also held an event.

“The council, the school, the community centre, local clubs and residents really pulled together to get the facility back up and running for the kids, and we are all so grateful.

“The kids were devastated after the fire, so getting the club house re-opened so soon is a real gift from the community.”

She added: “We hope to be re-opened in the second week in January.”

Everyone at Jobstown Boxing Club wished to send Christmas greetings to everyone who has supported them since starting out in 2015, particularly the community of Kiltalown.

“We would like to thank and send season’s greetings to the community of Kiltalown, where we are located, and to the wider Jobstown community who have embraced the club and through their children’s involvement, have made it a focal point within the community,” Jerry said on behalf of the club.