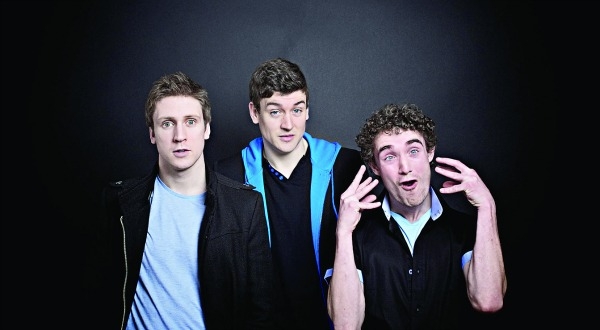 RATHFARNHAM comedian Sean Flanagan is one-third of rising comedy sketch trio Foil, Arms and Hog – which are bringing their critically acclaimed show to the stage of the Civic in March.

For those of you that haven’t heard of these guys, read on because they are set to infiltrate Ireland with their bizarre, surreal and hilarious comedy sketches – plus they revealed to The Echo what they would change first about Ireland if they were voted into Government in the upcoming General Election.

Following sell-out runs at the Dublin and Edinburgh Fringe festivals, Foil, Arms and Hog have more than four million hits on YouTube, five exclusives on American comedy website Funny or Die and an endorsement from Black Adder and Mr Bean comedian, Rowan Atkinson – and here on home soil, comedians Tommy Tiernan and Des Bishop have also given the lads the thumbs up.

This week local lad Sean ‘Hog’ Flanagan took a few minutes to speak with The Echo.

Confirm whose who? Whose Foil, Arms and Hog?

Sean ‘Foil’ Finegan, Conor ‘Arms’ McKenna and Sean ‘Hog’ Flanagan. The names came from a party where we were slagging each other and about our performance styles. Foil kept getting the “straight man” part i.e. the boring part, the comedic foil. Arms couldn’t play the straight man part at all and was wildly swinging his arms all the time. Hog took all the best parts and lines for himself i.e. hogging the limelight.

How did the group form and when?

We met in UCD Dramsoc and eight years ago we did our first gig literally wearing nappies at the Ha’penny Bridge Inn. It was a sketch about babies but we’ve learnt to use the audience’s imagination since and we leave the nappies at home now.

In recent years Ireland’s comedy scene has levitated more towards stand-up comedians. What attracted you three to sketches?

We started with acting in things. Then we did stand-up. Then we decided to mix the two together and we got sketches. We find there’s way more craic to be had in doing both.

During the writing process, do you spend most of the time laughing or do you see it as a job and just get it together?

Well, everyone has a laugh at work from time to time but in our job it is imperative. We constantly mess, prank, joke/annoy each other during the writing process. It is a brilliant job to have. And some of our best writing has come from pure messing. For example the Net People Sketch is sketch our fans often request. Putting a net over our heads and talking in a creepy voice. We get paid for that! You can’t get too serious when you are writing or you lose the reason for doing it in the first place – having a laugh and sharing it with others.

Foil, Arms and Hog’s recent video on the run-up to General Election 2016 is hilarious and chilling in equal measure! If Foil, Arms and Hog was elected the next Government, what’s the first thing you’d change or introduce?

Well the people in power at the moment are a bunch of jokers so yes why not elect us instead, I mean that’s our area after all. At least we’re professionals. The first thing we’d do would be to criminalize posting pictures of food on social media. We can’t eat what you’ve cooked for yourself so we don’t care! 10 year mandatory sentence.

Yes Mr. Bean saw our show in Edinburgh, that was a moment let me tell you. All we need now is for the Marx brothers to come along… we could be waiting a while.

You’ve been rising up the comedy ladder in recent years, why do you think your distinct comedy style is going down so well?

Well we all started at this funny show business at a very early age so we gain a lot of experience early on. That “gig” in the sitting room when I was 5 years old for Auntie Brid and the cousins still counts! You just have to stick at it in the funny business with a good attitude and eventually you’ll find your audience. Anyone can be funny they just have to get up on stage and find out what that is.

Ireland must provide you with a wealth of material to write into sketches, where do you look for inspiration?

Yes Ireland does throw a lot of material at us for example a YouTube sketch video we did recently involved an Irish family who staged an intervention for a young boy who DIDN’T drink. Some of our stuff can be very Irish like that but other stuff can just be surreal such as the Chair Heads sketch which is a sketch where the world is dominated by People with chairs for heads and humans persecuted because they are a minority.

What was the first joke you ever remember hearing?

It was a joke made up by my 6 year old play mate: “Why did the book fall off the table? …Because it was beside the fire.” It made no sense. But I remember laughing at it.

When you were growing up, was there any comedian or sketch show that inspired you?

Yes the Marx Brothers are a staple favourite of ours but also Billy Connolly back in the day, Jim Carrey and Eddie Murphy were unbelievably good at what they did. In more recent years, before we formed, a sketch group called H-Bam were particularly influential. Des Bishop was also kind enough to give us our first gig.

Get elected. Failing that, wait the couple of years until we are the appropriate 35 years old and go for president. Failing that, keep doing what we are doing, making comedy videos every Thursday on our YouTube channel, grow our audience and make sure our live gigs are as fun as possible. Motto: Funny first, think later.

Foil, Arms and Hog are bringing their show Skiddlywup to the stage of the Civic Theatre on March 24. Tickets are currently on sale. Visit www.civictheatre.ie or call the box office on 4627477.