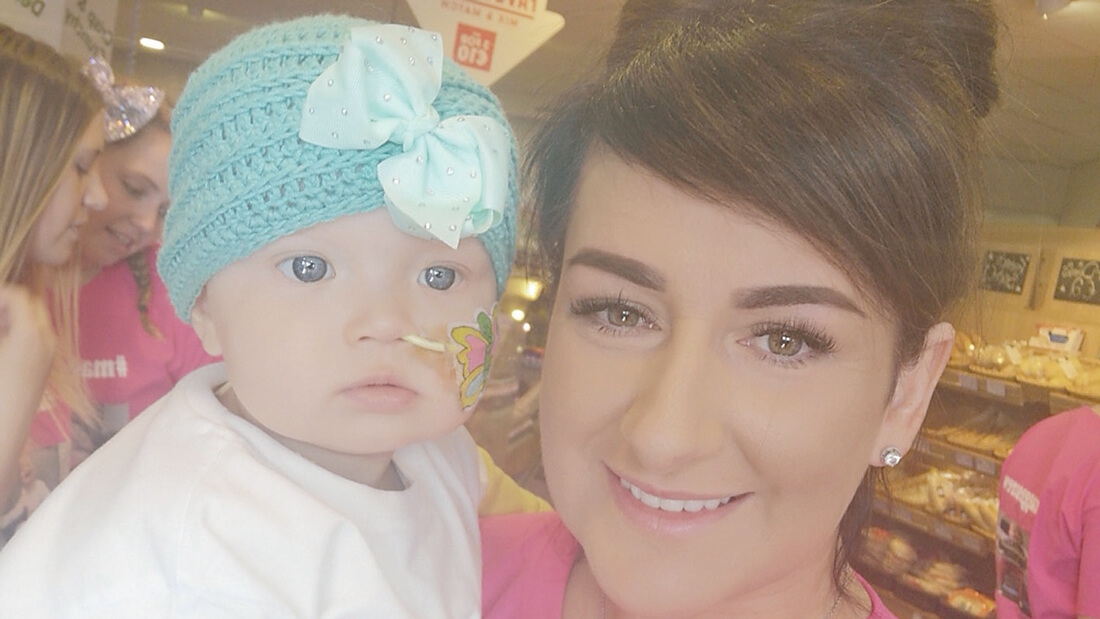 THE community has teamed up behind a one-year-old girl and her family, after a united effort saw €21,000 raised through the recent mini-marathon.

Just after celebrating her first birthday in January, little Maggie O’Donovan was diagnosed with acute lymphoblastic leukaemia – after a tumour was discovered growing over the little girl’s left lung and around her windpipe.

Maggie with her mam Deborah

According to Maggie’s mam Deborah, the tumour is now gone, but Maggie will have to continue on an intensive programme of chemo followed by two years of maintenance.

However, Maggie and her family are not alone, as the surrounding community of Ballyboden/Whitechurch unites to support them.

For the past 25 years, Deborah’s family, the Fureys, has run the local Centra in Whitechurch – and over that time has become part of the community.

Deborah’s friend Rebecca Merrigan told The Echo that after Maggie’s diagnosis she asked the family if she could do the mini-marathon for the one-year-old.

Rebecca set up a GoFundMe page with a target of €1,000 and prepared to do the mini-marathon on her own for Maggie.

However, it wasn’t to be, once word got out, with 54 women from the community last Sunday taking on the 10km route for Maggie.

“It was amazing to see the community coming together”, Rebecca said.

“The positivity around the community and the generosity of the people is just fantastic.

“Maggie came out on Sunday [before we left for the mini-marathon] to cheer us all on.

“It was very emotional . . . but there is a lot of goodwill behind her.”

Maggie with her mam Deborah and family friend Rebecca

The mini-marathon campaign for Maggie saw the team, with massive support from the community, raise €21,000.

“It’s unbelievable what people are doing for us.”

Maggie with her mam Deborah, dad Kevin and Rebecca (left)

She added: “When Maggie was first diagnosed she had a very tough ride . . . she was on St John’s Ward [in Crumlin] for 47 days.

“She is good now, but needs six to eight months of aggressive chemotherapy and two year’s maintenance.

According to Deborah the money will be used for Maggie’s care and medicines not provided for on the medical card.

It will also give dad Kevin, who is self-employed, the chance to take the odd day off if need be to care for Maggie and the couple’s older daughter, Evie (7).

Thanks have also been issued to local businesses CarCare Motor Co, Cooneys Topshop and Merrigan Electrical, which paid for tee-shirts and sponsorship

To donate visit the Maggie’s War fundraising page on GoFundMe.