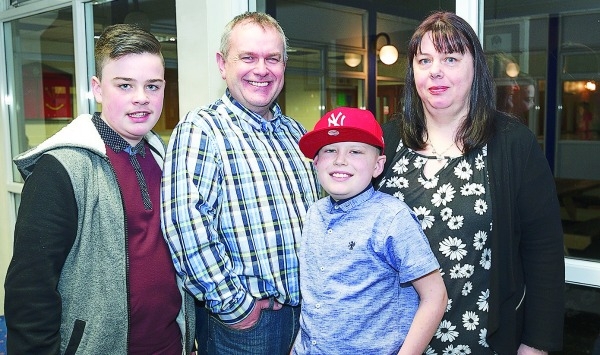 Community comes out to support brave young Daniel and his family

A BENEFIT night for a brave Tallaght boy who is battling cancer raised over €5,000 last week. Daniel Parkhill (10), a student at St Maelruan’s National School was diagnosed with cancer last October. Daniel lives in Sundale with his brother, Jonathan and his parents, Lorna and Mick.

The benefit night was the brainchild of Daniel’s teacher, Edel Beckett, and his leader in the Boys’ Brigade, Linda McGlynn. The night was held in the Roadstone Club in Kingswood.

Edel told The Echo: “We raised over €5,000. We had a DJ, a raffle and finger food. There were over 300 people there. It was a great turnout. It’s great also because Daniel is doing so well now.”

Lorna Parkhill was thrilled with the response to the benefit night.

She said: “There were 300 there but 500 tickets were sold. We can’t thank the organisers, Edel and Linda enough, and all who turned up and bought tickets.”

Daniel is back in school now after his treatment in Crumlin Children’s Hospital, where he spent Christmas.
Lorna said: “He is back in school now. His prognosis is good. It was horrible for us to have him in hospital for Christmas, but the staff are great there. They do a really great job.”

On Sunday, Daniel used money he got for Christmas and his birthday to welcome a new member into the Parkhill family, a lizard called Madagascar.

Lorna said: “He was delighted. They tell me it’s a girl and that it will keep me company. Daniel has wanted a lizard for some time. He got it with his Christmas and birthday money”.

NEWER POSTMother of two ‘at the end of her tether’ with council over dampness problem
OLDER POSTAbbey’s Army braved wind, snow and hailstones at the Forty-Foot