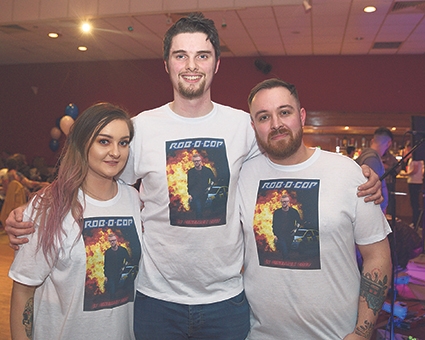 THE community response to fundraising initiatives for a man injured in a serious road accident, has surpassed expectations, with €3,000 raised in a single night  at an event last Friday - with the fund now topping the €10,000 mark.

Robert O’Sullivan (31), from Bawnogue, was struck by a car on the morning of August 29 as he was making his way to work on the Ninth Lock Road.

He sustained serious injuries, including a significant brain injury, and is still undergoing surgery and treatment in Beaumont Hospital.

A fundraiser for Robert held on Friday at the Coldcut Club in Clondalkin, was “a massive success”, according to Fiona Murphy, a friend of Robert.

“The night was a massive success, raising €3,000 to add to the existing recovery fund through the GoFundMe site,” said Fiona.

“We’ve currently got over €10,000 for the O’Sullivan family, and we’ve still yet to do our auction, so we’ll be adding a little more to that. There was amazing support from local businesses, with so many spot prizes.”

Rob recently had another surgery, and those close to him acknowledged that he has a “long road ahead of him.”

There was a lot of support from local businesses for the event on Friday, providing a long list of donations for prizes, which took Robert’s friends by surprise.

Raffle prizes included vouchers and hampers from a wide range of businesses, and signed jerseys from Shamrock Rovers, Dublin GAA and Leinster Rugby.

Robert’s family were able to make it to the event.

“It was a great way for them to see how much support and love there is for Rob,” Fiona said.

Fiona and Robert’s friends would like to thank everyone who supported the event.

Anyone who wishes to make a donation to Robert’s recovery, visit HERE.