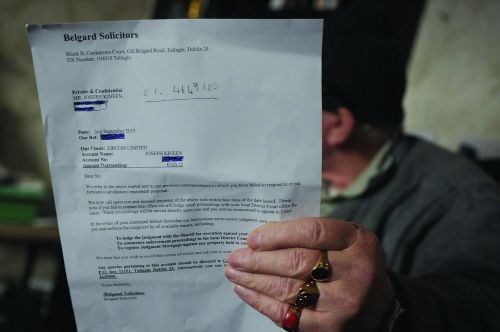 PENSIONERS living alone are facing the prospect of another difficult winter – with many at risk of fuel poverty.

Charity group Alone classifies one in ten older people at risk, and cites a HSE study (2005-09), which found more than 400 pensioners died as a result of lack of internal temperature in the home.

With increased costs, bills, and cuts to allowances, local MABS services have reported the pressure on elderly people to “cut their cloth” by cutting back on heat to buy food.

One pensioner The Echo talked to in Ballyfermot, is facing threatening legal action from a telecommunications company, after falling behind in payments – despite negotiating a deal months ago to pay off the €320 arrears in monthly instalments of €5.

The letter – which was viewed by The Echo – threatens Joe Kineen (74) with enforcement proceedings in the District Court, and a judgement mortgage against any property in his name.

Mr Kineen (74), from Landen Road, said: “I don’t even know what the letter fully means, but it has caused me a lot of upset. The only reason I fell behind in payments was because of medical reasons. I was concentrating more on my health than my bills.

Mr Kineen suffered a syringe attack in January, during which his pension was stolen by thugs.
He is “crippled with arthritis” and had a stroke two years ago, leaving one of his eyes visually impaired.
“I missed a couple of payments but I didn’t think the company would go under without it,” he said.

“You try to stretch the pension, but it doesn’t go far. Meals on wheels deliver to me three times a week. It’s awful stuff.”
Mary Shortt (67), lives on her own in Blackditch Road and says after the death of her husband, she is left with a dilemma as to what bills to pay.

Mary said: “I don’t drink, don’t smoke, didn’t go out for my birthday last year, but I have nothing to show for it. I paid the property tax, but I’m not paying the water – I just can’t go that far.”

Frank Cousins (68), a member of Clondalkin Age Active, said: “It’s a big problem. People are living on clippings of grass and are afraid to put the heat on.

“I see it every day – it’s terribly sad and I get very upset about it. Utility companies show no mercy. Unfortunately, the pension is not worth anything.”