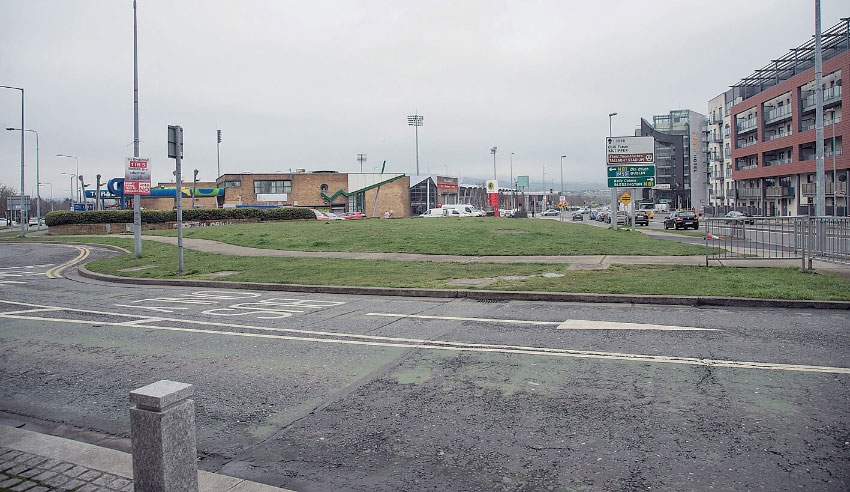 A GREENSPACE, which is used as a de facto walkway from the Luas and The Square to Tallaght Stadium, has been described as “hazardous” by a local councillor, reports Aideen O’Flaherty.

The patch of land is located on Cookstown Way, opposite the Topaz garage and First Stop Tyres, and is regularly used by pedestrians as it is a shorter route to the stadium than using the footpaths.

Tuesday’s FIFA Women’s World Cup qualifier between The Republic of Ireland and The Netherlands saw a record attendance of over 4,000 spectators in Tallaght Stadium, and, away from the action on the pitch, the greenspace on Cookstown Way had become very slippery as a result of rainfall and a large number of pedestrians walking on the grass to get to the venue.

Charlie O’Connor, Fianna Fail councillor for Tallaght Central, told The Echo: “I’m calling on South Dublin County Council to prepare a plan to respond to the challenges of pedestrian access to and from the Luas and The Square towards the stadium.

“When there’s big crowds at the stadium it’s very dangerous, [the greenspace] is in a dangerous condition and it has created a health and safety issue.

“It was hazardous on Tuesday night, you’d be afraid to walk on it.”

The stadium is currently undergoing a period of increased development, as work on the construction of a third stand – so the stadium can house an additional 2,000 spectators – is underway.

Needs to be tackled

Cllr O’Connor said: “The new stand will be encouraging more people to come to the stadium, so this issue needs to be tackled.

“We need to look at managing pedestrians, and asking the council what they can do to make it more safe.”

Cllr O’Connor added that he has been in touch with the council in relation to this matter, and it is not yet known who possesses ownership of the land in question.

SDCC was contacted for comment, but they did not respond in time for print.