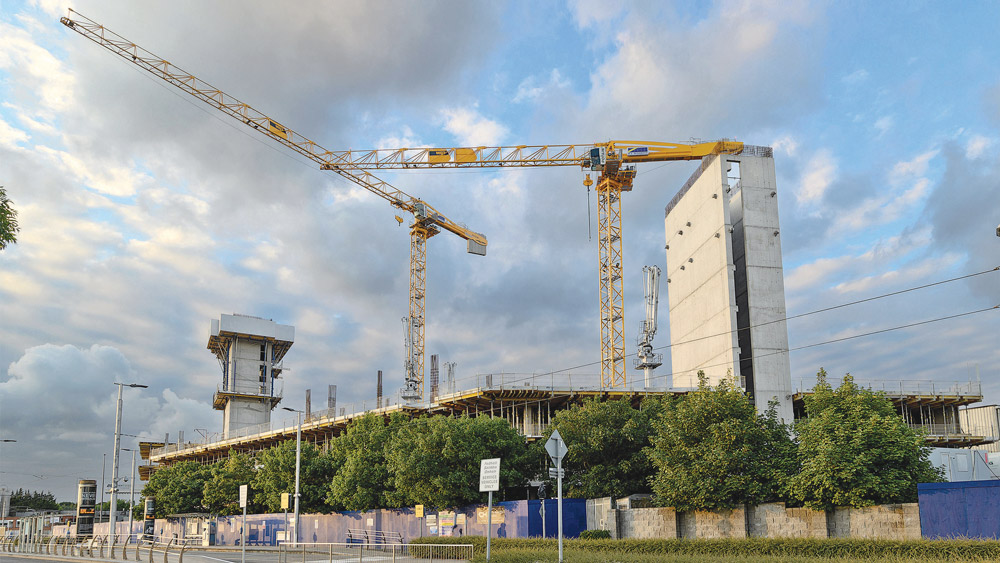 The cranes on the site in Cookstown Industrial Estate

Cookstown Industrial Estate ‘is going to be a housing estate’

THE stark rise of apartment blocks can be seen with the emergence of two high-rise tower developments in Cookstown Industrial Estate.

The construction work is taking place at Second Avenue in Cookstown Industrial Estate, at a site that formerly housed Bailey’s Cars.

Works began on the site earlier this year, and in recent weeks two of the apartment blocks for the 196-unit development have begun to take shape.

Provision of a commercial unit, community rooms, an office, a crèche and a gym, along with a landscaped courtyard bicycle store and underground car park, is included.

But Bernard Roberts, who lives in an area of Springfield that’s overlooked by the development, said he’s unhappy with the appearance of the development’s first two apartment blocks.

“The towers don’t look like a part of the skyline – the hospital is only two or three storeys high – the towers are above everything,” said Mr Roberts. “It’s overlooking our houses.”

When asked about his views on the development within the context of the housing crisis, Mr Roberts said he understood there was a need for housing, but he felt too much of it was being concentrated in the Tallaght area.

“The trouble is that they’re all in Tallaght,” he explained. “They need to scatter them into other areas in the county.

“I do agree with building apartments close to transport, but they’re being compressed around Tallaght.

“At this stage, Cookstown Industrial Estate is going to become a housing estate.”

Cookstown and surrounding areas have been the focus of numerous planning applications for apartment developments in recent years, including the permitted development of 252 build-to-rent apartments at 66 and 67 Fourth Avenue.

Plans for the construction of a 502-unit apartment development at the former Gallaher’s cigarette factory site at the junction of Airton Road and Greenhills Road have also been approved.

The former Cable and Wireless site at the junction of Airton Road and the Greenhills Road is currently being developed for the construction of 328 apartments.