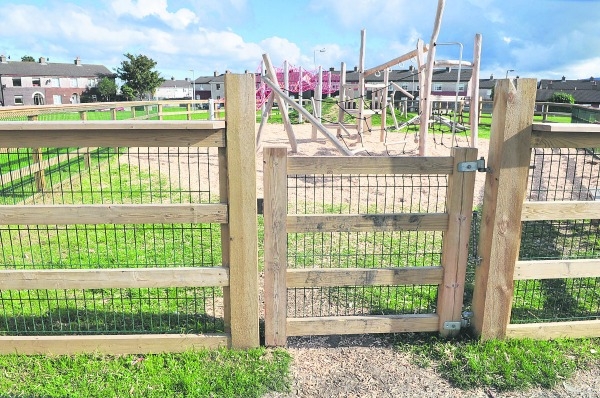 Crisis meeting to save €100,000 Tallaght playground from vandals

MEMBERS of the Brookview community are gathering this Tuesday, October 18, to develop a positive, grassroots response to the anti-social behaviour issues impacting on the area’s new playground.

Opened last May, the playground was installed by South Dublin County Council at a cost of over €100,000.

However, the playground has become a nightly hang-out spot for teenagers, who, believed to be from outside the area, have caused so much damage to the playground that the local children are unable to use it.

Tallaght South Sinn Féin councillor Louise Dunne told The Echo that swings have been broken, fires been lit and that vodka bottles and broken glass have been left lying around the play space.

In an attempt to curtail the damage being done, a pro-active community meeting is being held this Tuesday, October 18, by the Brookview Residents’ Association, with support from Cllr Dunne, in the estate management office on Brookview Avenue.

“We want to gather the community to resolve this in a positive way,” Cllr Dunne said.

“We have identified some of the young people and spoken with their parents, which has helped with the situation.

“We don’t want the council to re-instate the playground until the issue of anti-social behaviour has been fixed, and in fairness to the council, it is doing everything it can to alleviate this.”

Cllr Dunne also stressed the impact an “under-resourced” local policing force is having on the area.

She said: “The gardaí are completely under-resourced, an issue that every TD and councillor

has been highlighting but we’re not being listened to.

“We need inter-agency communication and everybody working together.”

Cllr Dunne confirmed that high-quality CCTV is being installed at the playground, which will help identify those engaged in anti-social behaviour – and act as a deterrent.

When contacted by The Echo, Laurence Colleran, executive parks superintendent with the council, said: “The playground in Brookview was installed prior to the school holidays and has been a very popular and well-used resource for local children and families ever since.

“Unfortunately in the last week there has been a sharp increase in vandalism and fires to play equipment and safety surfacing at night.

“Local efforts to protect the playground for the children of Brookview are not enough to prevent these attacks and the council are cleaning up the remnants of fires on a daily basis.

“Unfortunately this has led to a situation where many of the pieces of equipment have to be removed for safety reasons. The area of the playground for under eights is not affected by this.”

Mr Colleran added: “A community meeting is being organised to discuss how to deal with the problems there and we hope that we will be in a position to replace the equipment in the future.

“We deeply regret that we have had to remove the equipment as it was so well used and appreciated by local people, but the recent arson attacks have left many pieces in an unsafe condition.

“The council will continue to work with local people and the Community Gardaí to resolve this issue.”

The community meeting will be held at the estate management office on Brookview Avenue this Tuesday, October 18, at 6pm – and all are welcome.