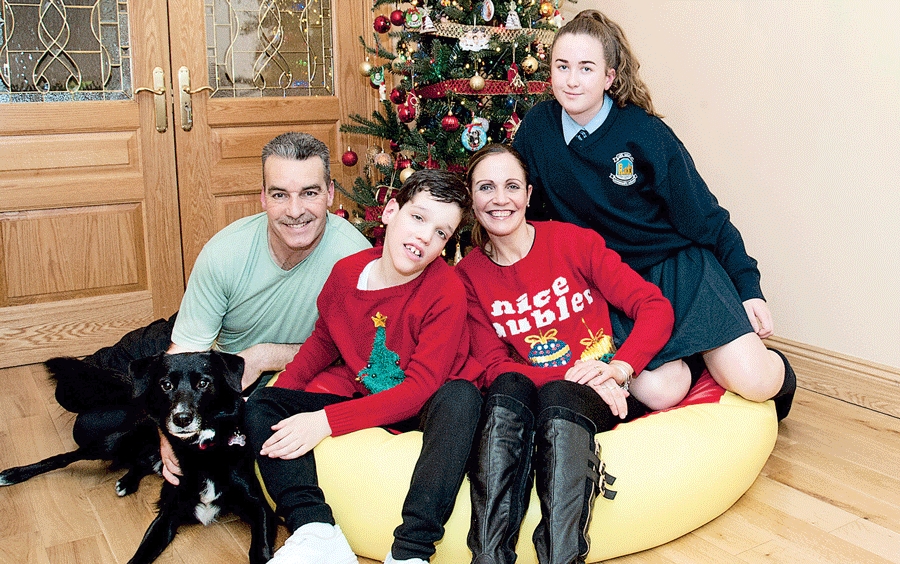 THE community has made one Tallaght family’s Christmas wish come true by uniting over the past 12 months to raise €100,000 – which will give the Tighe family, especially 10-year-old Daniel, a “brighter future”.

Looking back to last Christmas, Sinead Tighe said that her family was isolated and struggling.

However, when they reached out to the Tallaght community in early 2017 for support, their lives changed forever – with a trip to the bank this week, confirming that the family has reached their fundraising goal of €100,000.

Sinead lives of Kiltipper Road in Riverview with her husband Keith, daughter Shauna, and son Daniel, who is one of around 40 children in Ireland born with a rare genetic disorder called Sotos Syndrome.

As a result of Sotos Syndrome, Daniel has low mobility, severe epilepsy and is non-verbal and incontinent – with the ten-year-old also peg-fed due to feeding difficulties.

The disorder also causes rapid growth during the early years of life, which puts a lot of physical strain on both Daniel and his family.

To continue providing Daniel with the best quality of life, Sinead, Keith and Shauna started a campaign called Daniel’s Voyage last January to help raise money towards an adaptation of their home.

The works include a complete renovation of the ground floor to make it wheelchair-accessible and suitable for the installation of a hoist between rooms.

A new unit is also planned for the back of the house, which will be a bedroom and wet room for Daniel.

“The adaptation works will provide independence for Daniel”, Sinead told The Echo.

“He will also be safe within his own home and can stay here in his home with us for the rest of his life.

“We’ve also included a carer’s section in the plans, where a carer can stay when myself and Keith get older.”

This week, a final figure of €103,859.06 raised by Daniel’s Voyage was confirmed to the family – with all money raised in 2017 by individuals, sports clubs and local businesses in Tallaght and neighbouring communities such as Knocklyon, Ballyboden and Templeogue.

“We’re totally amazed at the support we received, we can’t believe it,” Sinead said.

“I knew Tallaght and its neighbouring communities had a great name for supporting others, but the realisation of that came this year.

“There was so many little things done for us, so many people thinking of us. The care and compassion we experienced was unreal.

“There were people who I knew didn’t have a lot of money and they gave what they could to me.

“These are the real people of Tallaght, they get behind you no matter what.”

Last month, Sinead was crowned Tallaght Person of the Year after being nominated for being a “tenacious and devoted” mam, with daughter Shauna also winning an award for the care she gives her younger brother.

Looking back on how their lives changed in 2017, Sinead said: “We were a very isolated family and we were really struggling through and didn’t know how we could go on.

“However, when I put my hands out to the community I made fabulous friends.

“The past year has knocked out all of the hard years that came before, all of the years carrying Daniel up and down the stairs and not having the right equipment to properly lift him.

“The community’s generosity means a brighter future for Daniel and for us as a family.”

She added: “Myself and Daniel are going to continue fundraising for people and groups in Tallaght, we’ll still be running, but running for others now.

“I also hope that Daniel’s story will help to create a better understanding of families and people with special needs, and I now see that I do have something to share with other parents.

“We are forever grateful for all that’s been done for us, the community has changed our lives.”