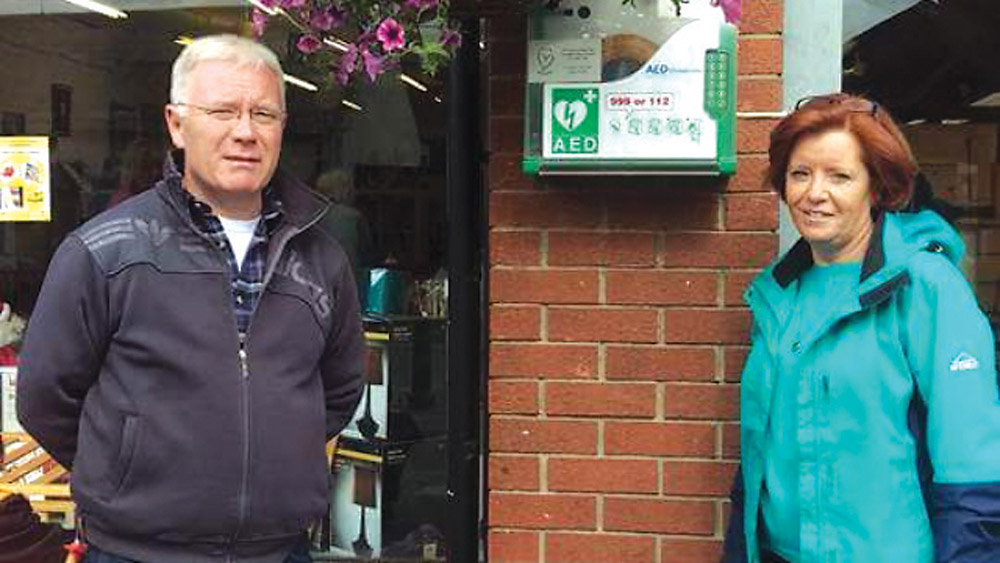 Defibrillator ‘is there to save lives’ of families and friends

A DEFIBRILATTOR in Clondalkin Village that was installed by the parents of 20-year-old Ciarán Carr who died of Sudden Adult Death Syndrome in 2012 was tampered with and had its glass case smashed.

The defibrillator, located on Main Street in Clondalkin, has 24-hour public access and was installed by Gemma and Philip Carr as part of their foundation that they set up to prevent sudden cardiac death tragedies in the community in honour of their late son, Ciarán.

Ciarán Carr collapsed while training with Round Towers senior football team in 2012 and despite the best efforts of his teammates, coaches and the emergency services, Ciarán died in Tallaght Hospital shortly after arrival. His death attributed to Sudden Adult Death Syndrome (SADS). He was just two weeks shy of his 21st birthday when he tragically passed away.

In 2013 the Ciarán Carr Foundation was officially launched and aims to ensure that sudden cardiac deaths are prevented in Round Tower GAA Club and the wider Clondalkin community by raising awareness, promoting CPR training and providing defibrillators to schools, sports clubs and businesses in the area.

Speaking with The Echo, Gemma Carr said she was informed by a friend about the incident earlier this month.

“I got a call from my friend… who said that she saw that the box of the defibrillator was open, so I rushed down,” Gemma told The Echo.

“The defibrillator itself was untouched but the glass case was completely smashed. I reported it to the Gardai who are going to check the CCTV footage, but they said it will take a few days.”

Philip and Gemma have embarked on a nationwide campaign with the foundation to get the emergency devices in every school and club in the country, and the defibrillator is one of many that has been installed in the Clondalkin area over the last number of years, as well as hundreds of people being trained on their use.

The defibrillator has been temporarily moved to the nearby Boss Hoggs Café until the box is replaced. Gemma is currently in the process of installing a heavy-duty glass box which will be installed in the coming days.

“It was probably just some people messing around, but it is there for a reason and God forbid one of their relatives or friends have to use it someday,” said Gemma.

“It is there to save lives, and everyone needs to know the importance of it.

“Parents reading this please, please speak to your kids who may be hanging around the pizzeria on Main Street and tell them that someday one of their family members or friends may need to have use of the defibrillator to save their lives.”