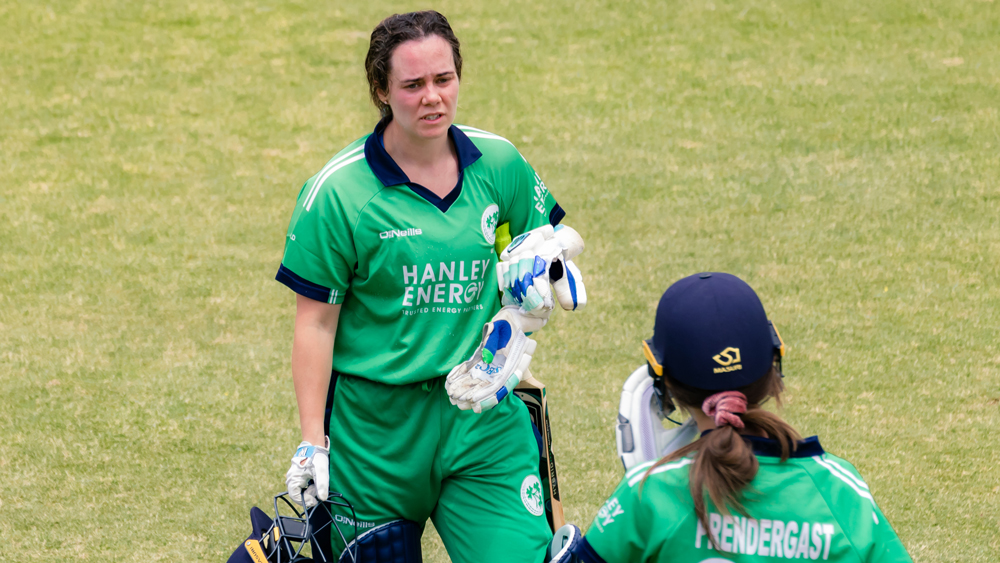 Delany helps Ireland dig it out against the Dutch

CAPTAIN Laura Delany proved a vital cog in Ireland’s victory over Netherlands in the second Group A match of the ICC Women’s World Cup Qualifier at the Sunrise Sports Club in Harare today.

The Knocklyon woman struck 75 from as many balls and claimed 1-24 from 10 overs in what was a Player-of-the-Match performance by Ireland’s longest-serving skipper.

Looking to bounce back from defeat in their opening match against West Indies, Ireland made a very positive start through Gaby Lewis and Leah Paul by way of their second back-to-back half-century opening stand.

And with the score at 61-1 in the 13th over, Ireland’s batters appeared poised to register a big score, but just as they did against West Indies, the girls-in-green saw four wickets tumble in the next five overs, leaving them teetering on 85-5.

It was left to captain Delany and the experienced Eimear Richardson to lead the fightback, with their 85-run sixth wicket partnership broken by leg-spinner Silver Siegers.

Delany carded her third international half-century in the 50-over format from just 47 balls, before finishing for 75 off 75 balls as Ireland were all out for 199 in the 42nd over.

The introduction of Delany resulted in the removal of de Leede, feathering a catch through to Bohernabreena woman Mary Waldron.

Capping that performance, Delany was involved in two Dutch run outs as eight wickets fell for just 31 runs in just over eight overs.

“I thought Holland bowled really well today and there was definitely a bit of relief there at the end, but I’m just really proud of the girls, how we went about our business” said Delany.

“It was a very competitive game and either side could have come out on top and thankfully it was us. “We dragged it back there at the end. I thought our fielding and our bowling at the end was brilliant.

“I think this is the start of the tournament for us. It was closer than what we would have liked it to have been. We definitely want to put more runs on the board, but I think, in the field and with the ball, we’re definitely capable of taking wickets and restricting sides” she insisted.

The victory leaves Ireland on a sound footing ahead of the final Group Stage match against Sri Lanka on Monday.