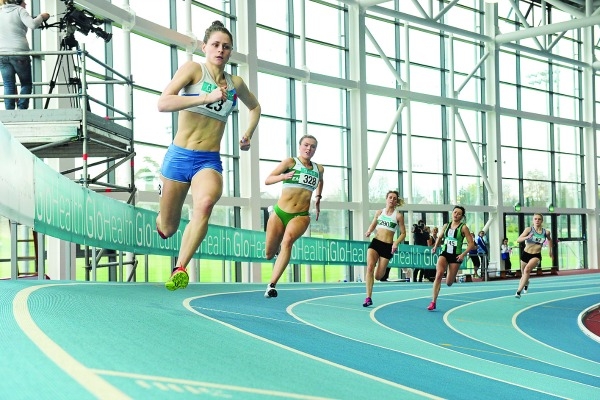 SINEAD Denny was the star of the show for DSD at the GloHealth National Indoor Championships in Athlone last weekend.

Making a strong start, she powered her way to the Women’s 400m title in a new personal best time of 53.57, comfortably seeing off the challenge of closest rivals Jenna Bromell of Emerald AC in second place and Christine McMahon of Ballymena and Antrim in third.

Denny’s clubmate Mollie O’Reilly, who was the youngest of the finalists, emerged from the race in fifth also in a new PB of 56.32.

There was a lot more for DSD to celebrate with Grainne Moggan and Grace O’Rourke occupying second and third place respectively at the close of the Senior Women’s High Jump, which was won by Craughwell AC’s Cathriona Farrell.

Both Moggan and O’Rourke cleared 1.70m while Farrell won the title with an effort of 1.75m.

There was a third place finish for DSD’s Erick Jerome Caprice in the Senior Men’s 5km Walk which was won by Letterkenny’s Brendan Boyce with Cian McManamon of Westport runner-up.

For Donore Harriers, Aibhe Healy took third place in the Senior Women’s Pole Vault after she cleared a height of 2.70m.

Her clubmate John Travers had to settle for a sixth place finish in the Senior Men’s 3000m while Nadia Power of Templeogue came home seventh in the Women’s 1500m and DSD’s Rick Nally was eighth and Donore’s Daragh Fitzgibbon tenth in the men’s equivalent.

In the Women’s 60m Hurdles, DSD’s Rachel Dunne was eighth while in the men’s contest, Tallaght’s Joshua Essuman crossed the line in fifth in a time of 8.62 with Donore’s Rolus Olusa seventh.

The latter also lined out in the Senior Men’s High Jump and cleared 1.80m to finish sixth while in Women’s Triple Jump Lynda Ngankam took fifth.

Joseph Ojewumi reached, what proved a highly-competitive Men’s 60m Final, and finished eighth with a time of 6.98, just .17 of a second off winner Craig Lynch.