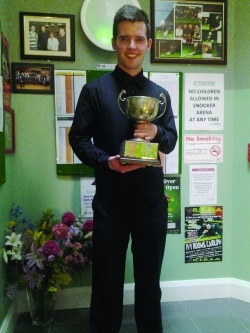 ANDREW Doherty is hoping he can one day follow in the footsteps of his namesake Ken Doherty and perhaps bring home a World Snooker Champion-ship title to Ireland.

following a 4-1 victory over Adam Fitzgerald in the final held in the Ivy Rooms in Carlow.

It was a tremendous feat for the Dubliner, who had previously fallen short in four finals against top drawer opposition including Josh Boileau- a runner-up in the World and European Under 21 Championships.

After a somewhat tentative start by both players, Doherty took the opening frame before doubling his lead.

Fitzgerald did pull one back after winning on the colours, but Doherty held his nerve to make it 3-1 before clinching the title in the fifth frame in which he planted a long black in the green pocket with the cue ball sitting awkwardly on the side cushion.

It was a tremendous victory for Doherty especially given that Fitzgerald bounced back to raise the Irish Under 21 Championship crown.

“It was a relief to finally win a national title” said Doherty after his win.

The Dubliner secured his place in this year’s Under 19 Final after finishing among the top two in the qualifiers in Tipperary earlier this year.

He is poised to make a return to club snooker next season with Darcy McGee’s in the Spawell in Templeogue and is also looking forward to lining out in the qualifiers for the Paul Hunter Classic in Germany in August.

More recently he lined out for Ken Doherty’s snooker club and The Spawell, where he is looking forward to making a return for the start of next season.