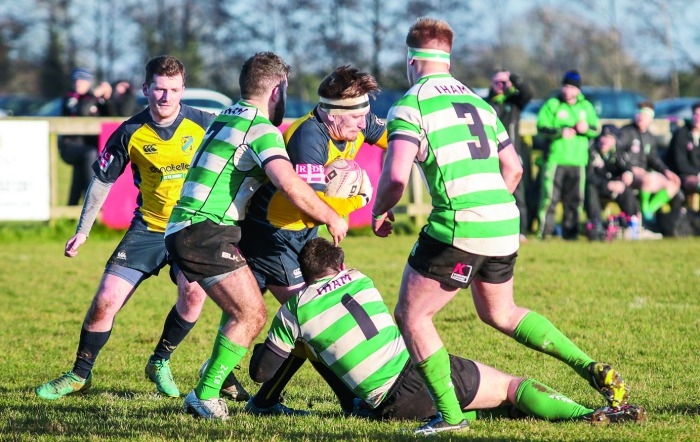 DESPITE strong performances on both counts, Clondalkin RFC came up just short in their Hosie and Lalor Cup Final encounters with Naas.

In the former, the halftime score of 18-14 in favour of Naas was exactly how it finished, Chris Jebb and Number Eight Paul McDermott accounting for their two tries in this match which were both converted by the former.

The Clondalkin pack performed very well but a few missed tackles and knock-ons at crucial stages of the game proved the undoing of Clondalkin in this match.

In the Lalor Cup decider, Clondalkin found themselves 10-0 adrift before registering their first score of the match- a penalty by Steve Cunningham.

Naas tagged on another try, before Paddy Ryan responded in kind when he intercepted an attempted pass and raced in under the posts to make for a simple conversion.

The same man broke over the whitewash again to draw the sides level only for Naas to regain the advantage just before the halftime break by way of a converted touchdown.

An early second half penalty saw Clondalkin close the gap, but again Naas pulled away with two more tries, yet the Gordon park side refused to give up.

Stephen McKenna scored after gathering a line-out and mauling over to make it 32-25, but with ten minutes remaining their opponents hit back with another converted try.

Darren Madden scored from close in after concerted Clondalkin pressure before the returning Dan Fitzpatrick scored after a tap penalty inside the 22, the conversion attempt hitting the post.