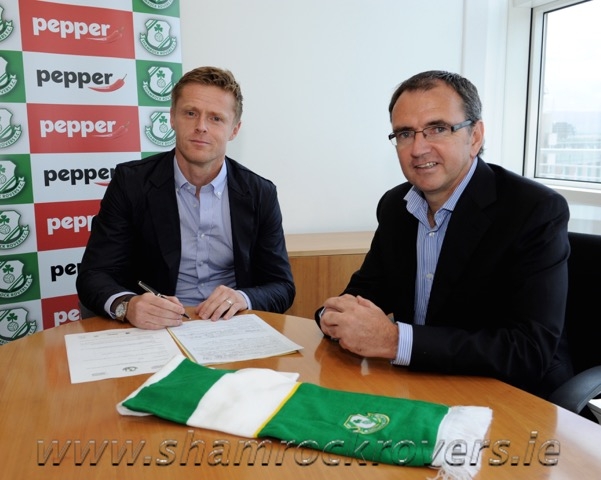 After weeks of speculation Shamrock Rovers have finally confirmed the signing of former Republic of Ireland International Damien Duff on an 18-month contract.

In a statement released by the club this afternoon the former Chelsea and Newcastle United man said, “I am very excited to have signed for the club. It’s great to have it all finalised and now I’m just really looking forward to getting back on the pitch.

“I am still out with a bit of an injury, but I should be ready to get back training fully before the end of the month. After that I will be very keen to get back playing regularly.

“I have always said that I wanted to come back and play in Ireland and I am very grateful to Pat (Fenlon) and the club for giving me the chance to do that.

He continued, “Not only do I get the chance to come back and play, but I get to do it at the biggest club in the country. I am as excited about this move as I have been about any in my career, be that Newcastle, Chelsea or any other.

“I left Ireland 20 years ago to go and make a career as a footballer and so now it’s great to be back. And I am definitely not just here to see out my time as a player; I intend to make a positive contribution to Shamrock Rovers and to the league.”

Duff joins fellow former Republic of Ireland Internationals, Keith Fahey and Stephen McPhail at Tallaght Stadium, and his experience and presence in the dressing room will surely offer the Hoops the chance to close the gap on current League of Ireland frontrunners, Dundalk.