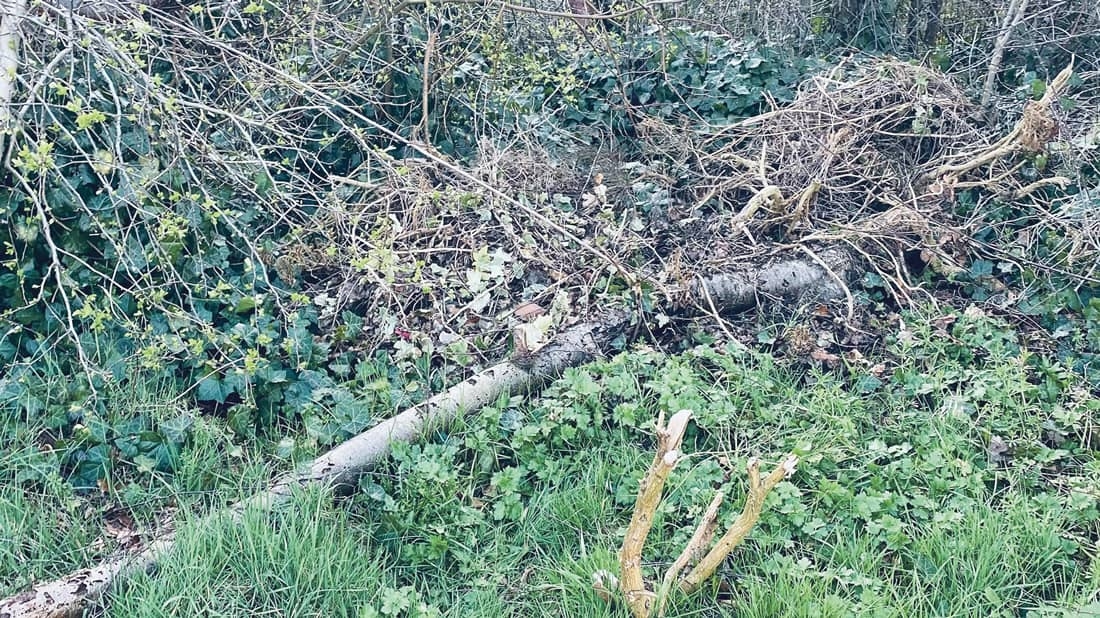 A COUNCILLOR is calling on people to dispose of their garden waste and grass cutting responsibly, after she recently spotted the illegally dumped waste in several green spaces in her locality.

Fianna Fáil councillor for Firhouse-Bohernabreena, Deirdre O’Donovan, said that she believes that some people think that because garden waste is ‘natural’ waste, it’s appropriate for them to dump the material in parks and green spaces – however this activity falls under illegal dumping regulations.

Garden waste dumped in a hedgerow

Cllr O’Donovan told The Echo: “This has been going on for years. Before I was a councillor, I was in the Knocklyon Woods Residents’ Association, and we cleaned out mounds of rotten grass in a green space.

“The rotten grass attracts vermin and other types of dumping. The following week, I was walking past the area and I saw a guy dumping grass at the same spot.

This is a common misunderstanding, said Cllr O’Donovan, who said the issue has gotten worse in recent weeks.

Residents from Old Bawn, Aylesbury and Ballycullen have been in touch with Cllr O’Donovan about garden waste being dumped in their locality

“I think it’s happening so much because there’s nothing else to do and nowhere else to go,” she added.

“This is one of those really emotive issues, but garden waste isn’t compost, and it’s not going to compost [if it’s dumped in a green space]. It just turns into green slime.

“I think there’s just a lack of information about it. It might be ‘natural waste’, but dumping it at hedgerows and green spaces is against litter laws.

Cllr O’Donovan said she wants South Dublin County Council to run a public information campaign about the issue, and she plans to table a motion about it at an upcoming council meeting.

A spokesperson for South Dublin County Council told The Echo: “The dumping of any waste, including garden waste such as grass, hedge, or tree clippings, is illegal.

“Leaving or throwing litter in a public place is an offence that can result in an on-the-spot fine of €150, or a maximum fine of €3,000 if you are convicted in the District Court.

“If residents are aware of the identity of people responsible for such littering or illegal dumping, they can contact South Dublin County Council at 01-4149000.

“Green waste may be disposed of in household brown bins and presented for collection to the waste service provider. Green waste is accepted into the Ballymount Civic Amenity centre at a reduced rate per vehicle.”