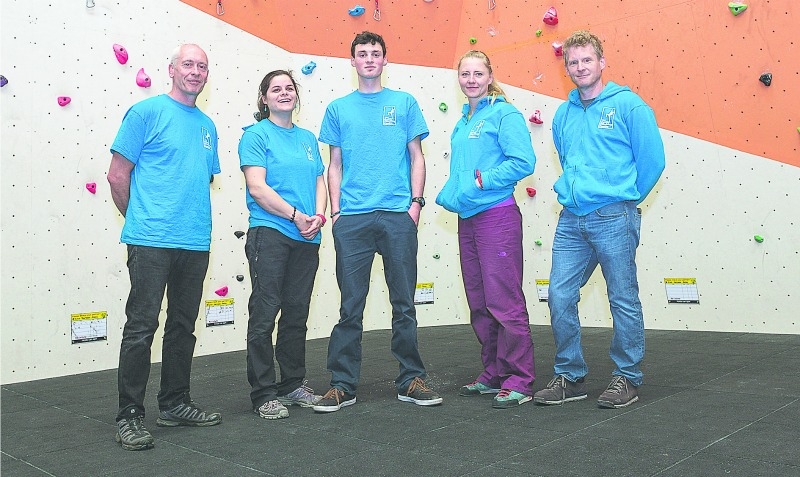 THREE friends have scaled the dizzying heights of business and put their passion and experience to the test by setting up one of Dublin’s top climbing centres in Tallaght.

Jason Aherne from Kingswood, Conor O’Connor from Firhouse, and Nicholas Keegan from Dun Laoghaire met through rock climbing and over the years have together taken on mountains both at home and abroad – including the Alps and the Himalayas.

After their hopes to set up a climbing centre were dashed during the high-rent rates of the boom, the lads didn’t let go of their dream and nearly a decade later have opened the Dublin Climbing Centre in The Square Industrial Complex, Tallaght.

After a six-month build, and a mighty eight-and-a-half tonnes of steel, the Dublin Climbing Centre – which has a highest vertical point of 11 metres –opened its doors, offering an inclusive, fun and alternative sport suitable for all ages and grades.

Jason Aherne, who, a carpenter by trade, built the centre, said: “Myself, Conor and Nicholas met over the years through rock climbing.

“The Irish climbing community was very small 10 to 20 years ago ,so everybody knew everybody and we travelled a lot together.

“We looked into setting up a climbing centre before and tried during the boom but the rent rates were crazy and four times more than what they are now.

“When we decided to give it another go a couple of years ago – it was still tough. We were a new company and it took us two-and-a-half years to get the building that we are in now.”

In November 2016, the Dublin Climbing Centre opened its doors and now seven months down the line is catering to people of all ages and all grades, both beginners and experienced climbers – alongside providing four full-time and two-part time jobs.

“This is what we’ve always wanted to do, so we’re delighted to have been able to get the business off the ground,” Jason said.

“It’s one of the top climbing centres in Dublin and as a sport it provides an alternative to the gym or soccer or GAA for both kids and adults – and is amazing for core strength.

“It’s a really fun, social sport and exercises the mind as well as the body as the climber has to overcome problems [to move up the wall].” He added: “It’s a sport that has no age barriers and people can drop in, pay €11 and stay there for the day. There is no time limit on the €11 and people can spend time on the wall, take a break, get something to eat, and meet people.

“We have coaches on site who work with climbers and we also provide training sessions and courses in the evening.”

The centre has a children’s wall and hosts birthday parties, with a world-recognised children’s training programme being introduced in the coming months. The Dublin Climbing Centre also hosts corporate team-building events.

Serving light snacks, cakes, tea and coffee on site, the Dublin Climbing Centre is open to the public from 12pm to 10pm Monday to Friday and 10am to 8pm on Saturdays and Sundays.